Group D: Can Croatia live up to their dark horse status? 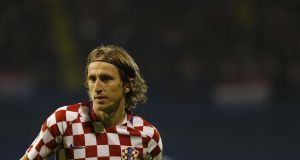 Luka Modric will be at the heart of Croatia’s midfield in Russia. Photograph: Srdjan Stevanovic/Getty

In a tournament which doesn’t seem to have a real standout team, Croatia could be the side most likely to spring a few surprises in Russia. Perennial dark horses, Croatia have a strong squad – particularly in the middle – with a handful of genuinely world-class players. However, these players are often constrained by the atmosphere surrounding the national team, which can often border on toxic. Indeed, manager Ante Cacic was fired with one game of qualification to go – with poor team morale cited as one of the reasons – and new man Zlatko Dalic helped the Croats limp over the line.

If Croatia can put off-field concerns to one side, then they could be a force to be reckoned with this summer. As noted, the midfield is particularly strong. Captain Luka Modric remains one of the game's finest midfielders at 32, and he has Real Madrid team-mate Mateo Kovacic and Barcelona’s Ivan Rakitic alongside him. Internazionale’s Marcelo Brozovic is another option in the middle – as is Fiorentina captain Milan Badelj – while Ivan Perišic should provide excellent service for Mario Mandzukic. The defence is slightly more circumspect, with Dejan Lovren likely to partner Domagoj Vida of Besiktas. On the whole Croatia are in good shape, and have the talent to take a major scalp or two as they did at Euro 2016, beating Spain 2-1.

Croatia’s first appearance at the World Cup – after the break-up of Yugoslavia – remains their finest campaign. The nation’s golden generation finished second behind Argentina in their group before facing Romania in the last 16. They beat the Romanians 1-0 before a famous 3-0 win over Germany in the quarter-finals. They took the lead against hosts France in the semis but a Lilian Thuram brace ended their fairytale run. Davor Suker scored the winner in the thrd-place playoff against the Dutch, securing the golden boot in the process.

A final round 2-0 win away to Ukraine – Dalic’s first game in charge – saw Croatia secure second place in Group I behind Iceland, having scored just 15 goals from their 10 games. Qualification was secured with a 4-1 aggregate win over Greece.

Zlatko Dalic took over with one game of qualification remaining, and cleared his first hurdle of getting Croatia to the World Cup. The little-known Dalic had previously been managing in the UAE, and it remains to be seen how he copes with the pressure of leading Croatia’s stars to a major tournament.

Croatia have a wealth of midfield options but Luka Modric remains the best. A key part of Real Madrid’s journey to the European Cup final, he dictates the side’s tempo.

Mateo Kovacic is gaining in influence at Real Madrid. A midfielder who can make powerful runs from deep, he will provide the perfect engine alongside Modric and Rakitic.

Croatia will fancy their chance against Argentina, but if they finish second in Group D they are likely to bump into France in the last 16, ending their campaign.