Euro Moments: Zidane quick on the double to down England 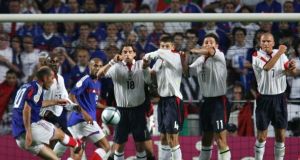 One of the hallmarks of the truly great players is the ability to do it on the biggest stages and produce moments of genius when it matters more than ever.

Zinedine Zidane was not only the finest midfielder and arguably footballer of his generation but he was also one of the best big-game players in the business.

From his Golden Goal against Portugal in the Euro 2000 semi-finals and his stunning volley for Real Madrid against Bayer Leverkusen in the 2002 European Cup final through to his iconic headbutt in the 2006 World Cup final, Zidane’s highlight reel is one of the best.

And with France losing to England in their key opening Euro 2004 fixture with just minutes remaining, who would step up to the plate? Yep, you guessed it.

England had taken the lead thanks to a Frank Lampard header from a David Beckham cross, before in the second half Zidane’s Real Madrid team mate wasted the chance to put the game to bed as he saw his penalty well saved by Fabian Barthez.

With minutes to go a clumsy Emile Heskey foul gave France a free-kick to the right of the D and 25 yards out. Zidane placed the ball and then whipped a stunning, fizzing, dipping effort into the left corner, leaving David James stationary and bewildered.

But Zizou wasn’t done there. Moments later Steven Gerrard produced a trademark loose backpass to put Thierry Henry through on goal, and the Arsenal striker was sent somersaulting through the air by James.

Only one man was going to take the resulting penalty. But as he went to place the ball Zidane was physically sick on the pitch.

Zidane blasted the ball into the left corner and the turnaround was complete.