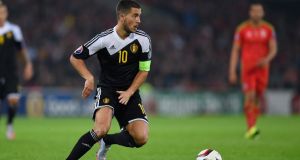 Chelsea’s Eden Hazard appears to have woken up just in time for Belgiums Euro-bid. PHotograph: Getty 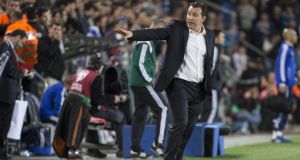 Don’t rule out Marc Wilmots getting his hands on the trophy in July. Photograph: Getty 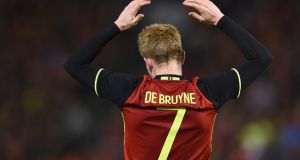 Kevin de Bruyne has flourished since leaving Chelsea and is one of the key players in a very potent Belgium attack. Photograph: Gettty

Their world ranking may be an ongoing source of puzzlement, given that they went out of the World Cup at the quarter-final stage and hardly stormed through a group that included Wales as well as Bosnia & Herzegovina. Okay, Marc Wilmots’ side topped it but only by two points and they managed just one point from their two encounters with Chris Coleman’s side. Of course, if the world rankings were based on the total value of individual players then there would be no mystery at all about Belgium’s status. Thibaut Courtois, Radja Nainggolan, Romelu Lukaku, Eden Hazard, Kevin De Bruyne . . . The list goes on and if Wilmots can somehow make this lot add up to the sum of their parts, never mind more, then they must be in with a crack at the championship. Certainly, that was the thinking two years ago when a decent tournament in Brazil was seen as a stepping stone to greater things. So far, though, there is little to suggest they have developed as a group in the way that would have been expected. Vincent Kompany is a loss but the bigger issue is up front where, Lukaku, the most obvious candidate for the goalscoring role has just never delivered for the national team. They should do well – although the draw is tough – but they certainly don’t go there with the air of would be champions.

The number two ranked team in the world were under significant pressure to shine in the latest qualifying campaign and will be expected to perform in France as well. Widely regarded as underachievers given the class in their ranks, many feel that this could be the year that the Belgians finally join the elite of international football. In qualifying they certainly lived up to expectations, but not without a shaky start. Draws with Bosnia-Herzegovina and Wales in their opening three games set Marc Wilmots’ side back somewhat. However six wins in their final seven games (although they still lost 1-0 to Wales) saw them top the group and qualify for their first European Championships in 16 years.

Wilmots enjoyed a stellar playing career which took him from Standard Liege to Schalke and Bordeaux, while along the way becoming Belgium’s record top scorer at the World Cup. After sitting as a politician in the Belgian senate for two years he moved into management and was appointed national team manager in 2012. The 47-year-old guided his side to World Cup qualification in his first campaign, reaching the quarter-finals in Brazil before being knocked out by Argentina. He is hugely popular in Belgium and has been instrumental in bringing youth through to the national squad. Don’t rule him out as the winning manager at Euro 2016.

De Bruyne is just one of the talented members of this impressive Belgium squad but, based on current form, he looks to be the most dangerous. After an unsuccessful spell at Chelsea de Bruyne has flourished since returning to England with Manchester City and looks to be fulfilling the potential heaped on him since his late teens. His pace, coupled with that of Eden Hazard and the power of Romelu Lukaku up top surely make Belgium an appealing prospect to lift the trophy at odds of 11/1.

One to watch: Eden Hazard

Nobody quite epitomised Chelsea’s staggering transformation from champions to chumps like Eden Hazard. Outstanding and often unplayable during the 2014/15 season it took him until April 23rd to register his first goal during a dismal title defence. However Hazard remains one of the continent’s finest attacking talents, and his low centre of gravity means at time his dribbling is bewitching. Speedy and a proven goalscorer - the past term aside – he is arguably the pick of Belgium’s long list of quality forward options, and Ireland’s job on June 18th will be a lot easier if he isn’t on song.

“The Belgians have a terrible country. How many languages does one country need? And have you been to Brussels? It’s a hellhole. Belgium sucks.”