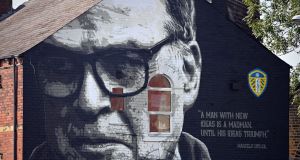 A mural is seen on the side of a building featuring an image of Leeds United’s Argentinian head coach Marcelo Bielsa. Photo: Paul Ellis/AFP via Getty Images

There is a section in Tim Rich’s engrossing recent biography of Marcelo Bielsa, The Quality of Madness, where the former Barcelona manager Gerardo Martino – also a former player under Bielsa in Argentina – addresses an idea in the book’s title that the current Leeds United manager/guru/saviour is, well, a bit mad. Hence Bielsa’s long-standing nickname, El Loco.

Martino obviously knows about the nickname and its implication. But he had seen not just Bielsa from the inside, Martino also knew professional football from there and he makes the valid point that Bielsa is known as El Loco – “because the thinkers in football are usually called ‘El Loco.’”

7 Joe Biden’s presidential inauguration: Where can I watch, and what are the key moments?

8 Kathy Sheridan: There is no fairytale ending to the Trump version of American Psycho

10 Gordon D’Arcy: Time for IRFU to be bold and secure futures of prized assets

13 Is this the face of Ireland’s lost patriot Robert Emmet?

14 Q&A: Can I still pass Covid on after I’ve been vaccinated?

17 Joe Biden to be inaugurated as 46th US president

20 Woman pleads guilty to having €600,000 in organised crime cash in Drogheda

21 Baked spuds get a tasty, crunchy filling and topping

26 Fontaines DC are reborn as punk-funk disconauts, and the results are cracking

28 Gorgeous terrace turnaround is right on track for €445k

30 Man who sexually assaulted woman on Luas tram is jailed

32 ‘I got a burning smell in my nose’: Third-wave Covid-19 patients share their experiences

36 What can Ireland expect from Joe Biden?

40 Could talking spread Covid-19 as much as coughing does?