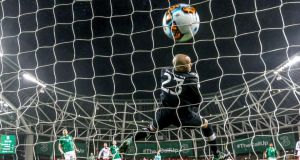 Ouch. When Ireland fall apart, they fall apart spectacularly. The long road to Russia ends on a 5-1 hammering by Denmark and the consolation that maybe the world deserves to see Christian Eriksen in his prime. Out-scored, out-classed and out-thought, it was a devastating night for a limited Irish team with limitless courage. But it also marks a black night in Martin O’Neill’s long managerial career. And as the Danes celebrated, there was only one question. What now?

“I will have to have a real think about it,” the Irish manager said about taking up a verbally agreed contract with the FAI to continue for a further two years. “We were beaten in a playoff game. We fought tooth and nail to get this to this position. The disappointment is really, really strong tonight but I have to commend the players on getting this far.”

Ninety minutes is an eternity in football. Two minutes before the kick-off, the Lansdowne crowd was raising the rooftops. It was the old stuff: intense and electric anticipation. Just give it an hour, survivors of the Copenhagen game muttered. This place will be like a morgue.

But it wasn’t. From the beginning, it was as if both teams had been stung by the negative reaction to the general dreariness they inflicted on Saturday-night Copenhagen.

For the visiting Danes penned behind goal, it must have been a strange experience. The Irish roar at kick-off was primal and for the first four minutes every single tackle, challenge in the air and Danish mistake was cheered as if it was a goal. They sang Just Can’t Get Enough with more energy that Depeche Mode will probably do when they play Dublin on Thursday night. They were still singing it when Ireland smoothly and unbelievably did what everyone feared they might not. They scored.

Yes, it was from a set play - a centrally located free kick floated in by Robbie Brady and translated into an anything-could-happen scenario by a loose touch from Nicolai Jørgensen. What did happen was that Shane Duffy came at it full-throttle to nail a terrific header beyond Kasper Schmeichel. Ireland swooned. Somewhere, Jack Charlton chortled. Put ‘em under pressure. All that. The Danish coach, Åge Hareide swallowed bitterly like a man who understood for the first time this mysterious saying about the luck of the Irish.

After that, all hell broke loose. For the next 15 minutes, score lines of 2-0, 3-0, 1-1,1-3 were all plausible as the Danes began to throw caution - and Poulsen - to the wind. Again, Darren Randolph stood tall, stopping a low, dangerous and obscured strike by William Kvist with a stretching right-hand save and denying Sisto two minutes later.

For about six minutes, Denmark laid siege. Then Daryl Murphy broke out to almost score a screamer from Cyrus Christie’s first time ball. Alarm bells must have been ringing through Martin O’Neill’s mind because the match had gone way, way off script and it wasn’t yet 25 minutes old. It was partly O’Neill’s own doing; playing McClean up front with Murphy took the teeth out of the Irish midfield in a system in which Jeff Hendrick looked lost.

If the signs were there, they didn’t take long to change into scary monsters. Denmark hit the country for two goals in a matter of minutes. Both stemmed from Irish mistakes. Sisto sold a nutmeg to Harry Arter from a corner and when Andreas Christensen got a foot to his whipped cross, Christie discovered he had stepped away from his sentry duty on Randolph’s left post. He scrambled to recover and arrived just in time for Christensen’s shot to rebound in off him. It was cruel and, as O’Neill called it, “a comedy of mistakes.”

Then, in the 33rd minute, Stephen Ward got caught with nobody to pass to, was turned over by Yussef Poulsen and Denmark’s break was exquisite: a smooth ball from Poulsen to Jørgensen who rolled it onto Eriksen. The finish was exquisite: a so-that’s-what-all-the-fuss-is-about touch of brilliance and worth a lot of money to the Danish FA.

Don’t die wondering, was O’Neill’s mantra. So in came Wes Hoolahan and Aiden MGeady, effectively the Creative Department of this squad. It made no difference and by now, the Irish players were out of sync. Plus, withdrawing Arter and Meyler was a gamble by O’Neill.

“I can’t disagree with that. We needed to try and get a few goals and get a bit of width again and what happens is you lost that bit of physical strength inside. But we needed to get some goals and Denmark made us pay for it.”

Eriksen had a hat-trick by the 72nd minute and all three of his goals were gorgeous. Ireland’s super-structure was shattered by now and with five minutes left, the stadium was half empty as Nicklas Bendtner joined the fun by firing home a penalty. The Danes might have had eight here. Lansdowne Road is becoming a haunted place for this Ireland team and sadly, this may have been a swansong for a number of dedicated Irish players.

The game moves on and long before the final whistle, next summer in Russia had faded into the past.