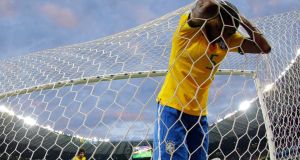 Fernandinho of Brazil after a goal scored by Toni Kroos of Germany during the hosts’ heavy semi-final defeat at the Estadio Mineirao in Belo Horizonte. Photograph: Robert Ghement / EPA

At the mouth of the Amazon on the north coast of Brazil lies the city of Belem.

Belem was not chosen to be one of the World Cup host cities, so I have not been there to confirm a story somebody told me a couple of weeks ago. Apparently mango trees grow there in such abundance that at certain times of the year the falling fruits form a thick, tasty carpet on the ground. To be destitute in Belem is to have bad teeth but a relatively healthy, if monotonous diet. It’s one of the minor perks of living in a country as fertile as Brazil.

The city of Belo Horizonte, where on Tuesday Brazilian football suffered its greatest humiliation, is located in the state of Minas Gerais, meaning General Mines. The hills here were full of iron, gold and precious stones and to this day the mines continue to power the state economy.

Iron ore accounted for 47 per cent of Minas Gerais’ exports in 2011, up from 24 per cent in 2000. Most of the increase was accounted for by demand from the Asian market. The Brazilians ship the ore, the Asians turn it into steel and buildings.

Brazil’s most famous commodity is probably its football players. Travelling around the country, you can see that all the cliches about Brazil and football are true. In every region, every city, even in the hot and humid climates, you see people playing the game.

The sporting culture runs deep, the technical standard is high, the population is huge, and that equates to a steady supply of extremely talented football players.

The vast majority of them are shipped overseas as unfinished or semi-finished goods. They play for Brazilian clubs only for a couple of years at the beginning of their career, and sometimes not at all.

In a taxi on the way to the Mineirao stadium for the Brazil-Germany match, a Portuguese-speaking friend conversed at some length with the driver. The driver looked about 60 and didn’t sound hugely excited about the game. I heard him mention Fernandinho several times.

After a few minutes the conversation slowed down.

“What was he saying?” I asked.

“He says the team are liars.”

“Liars?” I hadn’t expected that.

“He says he doesn’t even know who half of them are. They’re all foreigners.”

It transpired several hours later that the driver had been right to question the bona fides of the Brazilian team. The “foreigners” remark was perhaps more revealing, however.

To many casual Brazilian fans whose fandom is confined to watching local league matches on terrestrial television, Fernandinho might as well have arrived in a flying saucer.

Fernandinho is actually a less extreme case than others in the Brazil squad. He at least played a couple of seasons for Atletico Paranaense before leaving Brazil. Hulk, for example, spent less than a single full season in domestic Brazilian football before leaving for Japan, then Portugal, and ultimately Russia.

When you combine this with the fact that the national team plays the vast majority of its friendlies abroad for financial reasons, you can see how, simmering beneath that surface layer of patriotism, there is a resentment with the team, a sense of disconnection that was exposed on Tuesday night, when the angry crowd mercilessly turned on the players, refusing to show them any mercy even when the team tried to thank the fans for their support after the final whistle.

The rage directed at the players would be better focused on the system that scatters them to the four corners of the earth and does nothing to help them fulfil their potential.

Brazil’s approach to fostering players for its national team reminds you a little of those David Attenborough scenes of thousands of sea turtle hatchlings crawling down a beach to the sea. They are beset by all manner of predators but there are so many that only one in a thousand needs to make it.

Is it any wonder that after decades of this, Brazil no longer has a national style, comparable to Holland, Spain or even Uruguay?

There is no longer any sense of what a Brazilian footballer is supposed to be, beyond the principle of physical power and some nostalgic notions of trickery and cunning which are rarely emphasised in practice.

On Tuesday the Brazilian players proved unequal to the task but it was impossible not to feel pity for them as they were shamed by their own crowd. It would be wrong to call these millionaires the victims of the failing system they represent, but their failure was the symptom of a wider malaise, not the cause.