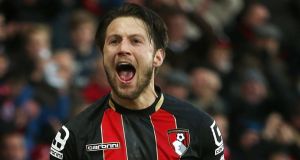 Harry Arter of Bournemouth has been included in the Ireland squad. Photograph: Jordan Mansfield/Getty Images

Ireland manager Martin O’Neill has named uncapped Bournemouth midfielder Harry Arter in his squad for the visit of Poland in the upcoming European Championships qualifier.

The 25-year-old has six goals in 38 appearances for the high-flying Championship team who currently sit at the top of their respective league table. Arter qualifies for Irish inclusion through his Sligo grandparents.

Arter has been involved in Republic of Ireland under-17 and under-19 squads in the past.

In the initial squad release on Thursday morning Norwich City’s Wes Hoolahan was quite oddly omitted, but this has since been put down to an administrative error of sorts and he has indeed been added to the revised 35-man squad.

Robbie Brady was expected to miss out through an ankle injury he picked up during a club training session, but he has made the squad. His left-wing-back experiment will more than likely be put on ice for this one though.

All three of Ireland’s Player of the Year nominees; Jon Walters, John O’Shea and Aiden McGeady are involved.

After a defeat to Scotland in the last qualifying game a positive result is vital in the Aviva in less than two weeks’ time.

Speaking at today’s press conference O’Neill said, “We have reached a very important time in our qualifying campaign. I am looking forward to assembling the squad for the first time this year in preparation for this game.”

1 Robbie Henshaw likely to be the only Irish change for France finale
2 Seán O’Brien: Anger over my parents’ break-up never left me
3 Cian Healy: ‘Realistically I got away with murder when I was younger’
4 Gerry Thornley: Antoine Dupont and France look perfectly primed for Ireland visit
5 Ireland's centre will hold thanks to Henshaw and Aki’s midfield muscle memory
Real news has value SUBSCRIBE
Crossword Get access to over 6,000 interactive crosswords