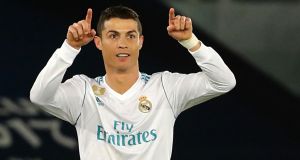 In terms of goalscoring exploits, Fernando Peyroteo’s achievement in 1938 used to be the benchmark. The grandnephew of António César de Vasconcelos Correia – the 93rd governor of Portuguese India – had arrived at Sporting Lisbon the previous summer after being spotted by scouts while he was growing up in Angola, and promptly scored an astonishing 69 goals in 33 appearances as part of the celebrated Cinco Violinos (Five Violins) forward line.

To put that figure into perspective, that meant Peyroteo became only the third man in history to pass the 60-goal mark in a calendar year, following in the footsteps of Hungary’s Imre Schlosser (64) in 1912 and Everton’s Dixie Dean (62) in 1927.

Amazingly, he went on to repeat the feat eight years later, finding the net on 62 occasions in 32 appearances, including one match in which he recorded nine. “Fernando was a goalscoring machine,” declared the manager Cândido de Oliveira at the time.

Defences have certainly improved in the intervening years, even if Pelé and Gerd Müller managed to break through the 70-goal barrier for the first time in 1958 and 1972 respectively. But the emergence of Lionel Messi’s rivalry with Cristiano Ronaldo has set new standards in European football. Since Messi joined the exclusive club in 2010 by scoring 60 goals, he and his arch rival have both surpassed that figure on four occasions, with Messi’s 91 in 69 matches during 2012 – achieved at rate of 1.32 goals per game and including six hat-tricks – the current record.

He may not have hit those heights this year, but with Messi, Ronaldo and three others still vying to become 2017’s top scorer, there is more competition than ever before.

Edinson Cavani broke a four-way tie at the top on Wednesday night when he scored in the first half of PSG's 3-1 win over Caen at the Parc des Princes to move on to 54 goals for the year, his games now completed.

It also ended Robert Lewandowski's hopes of claiming the crown after the Polish forward failed to score in the 2-1 German Cup win over his former side Borussia Dortmund. Lewandowski is also now on his winter break.

Messi and Ronaldo are also both on 53 goals and Tottenham’s Kane only three behind.

But while Mesi and Ronaldo have only one more chance to stake their claim, the Spurs striker still has fixtures against Burnley and Southampton to come – in which he will also attempt to break Alan Shearer’s record of 36 Premier League goals in a calendar year, which was achieved over 42 matches in 1995.

Failure to score in his last two matches has seen Kane slip slightly off the pace in the final straight, although he will still fancy his chances of making up the three goals he needs to match Shearer’s record, having recorded the best ratio (1.04) of goals per game.

Clearly irked by his failure to win the kicker Torjägerkanone for the Bundesliga’s top scorer back in May, Lewandowski has made up for losing out to Pierre-Emerick Aubameyang by setting a slew of new records since. In September, a return of 82 goals in his first 100 Bundesliga appearances for Bayern meant the 29-year-old surpassed Rudi Völler’s record of 72, while he also became the first player to score 16 goals in a major European international qualifying campaign as Poland booked a World Cup spot in Russia with ease.

Renowned as a penalty expert – he has missed just three from 38 in his entire career, including converting all 10 this year – Lewandowski has also scored an unusually high number of goals with his left foot (11) in 2017 in comparison with previous seasons, including the winner against Cologne last week and in the recent Champions League victory over Paris Saint-Germain. However, his failure to score against Stuttgart on Saturday and against Borussia Dortmundcost him in the end.

Cavani  finished strongly after ending a run of five matches without scoring against Rennes at the weekend. Predominantly right-footed (just four of his goals this year have been converted by his weaker foot), Cavani’s exploits are all the more remarkable given that he now shares penalty duties with Neymar following their high-profile disagreement during the win over Lyon in September. His miss against Troyes at the end of last month came just three days after Neymar converted from the spot against Monaco and would have given the Uruguayan a slender lead going into his final match of the year.

Perhaps fittingly, however, it is likely to be Saturday’s clásico that will determine who comes out on top. Messi equalled another of Müller’s seemingly insurmountable tallies when he scored his 525th goal for Barcelona against Villarreal this month – a record number for a single club in Europe’s major leagues. Had one of his three efforts that hit the woodwork against Deportivo La Coruña on Sunday (not to mention the penalty saved by Rubén) gone in, he would already be out on his own, although perhaps it was fate that it should go down to the final match of the year.

Failure from the spot against Deportivo also meant Messi is the first Barça player to miss three penalties in a calendar year since Samuel Eto’o in 2005, but with 17 assists to add to his 53 goals for club and country, he remains by far the most productive of the five contenders. Only his former team-mate Neymar (33 goals and 29 assists) comes close to matching the Argentina forward’s overall tally of being directly involved in 70 goals in 2017.

By way of contrast, Ronaldo has reached 53 goals having made four fewer appearances – incidentally his lowest total since 2010 – and contributed 13 assists in leading Real Madrid to five trophies this year. With seven goals in his last six appearances, the Portuguese has the form to edge ahead of Messi, and the rest, when it matters most. And how he would love to get another one over his nemesis a few weeks after equalling his record of winning a fifth Ballon d’Or.

1 Frustration for Lowry and McIlroy as Li leads at US PGA
2 Michael Walker: Pressure mounts on Barcelona to stop slide
3 Wolves found in breach of financial fair play rules by Uefa
4 Sporting Cathedrals: Semple Stadium, the very centre of the hurling universe
5 War and romance behind 147 unbroken years of the Nationals
Real news has value SUBSCRIBE
Crossword Get access to over 6,000 interactive crosswords