Atlètico Madrid go down to the wire with Barcelona 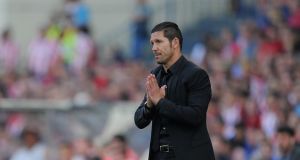 There was a moment late in the penultimate game of the season last weekend when Atlético Madrid’s assistant coach, Óscar Ortega, began to celebrate the end of the club’s 18-year wait for the league title.

It was 1-1 against Málaga at the Vicente Calderón while, 600 kilometres to the north-west, Real Madrid were losing 2-0 at Vigo and, 400 kms to the south-east, Barcelona were drawing 0-0 with Elche. The clock was ticking down, Atlético were a goal from glory and, with Real now out of the title race, that goal could come at their game or Barcelona’s.

From somewhere behind the Atlético bench, where fans sat with radios in their ears, came the hint of a cheer. It seemed that Elche had scored. Ortega leapt up in excitement. And then, slowly, he deflated. From the front row, a supporter slowly, sadly wagged his finger. “No,” he said. Elche had broken away but the shot had flown just over the bar.

Atlético had been close and they were about to be closer. The full-time whistle blew in Elche but there was still a minute and a half left at the Calderón, where a huge roar had met the “5” held up by the fourth official. On 94.04, Adrián cut inside from the left and curled a right-footed shot towards the far top corner.

Shocked
This was it. But just then the Málaga goalkeeper Willy Caballero reached the shot, brilliantly tipping the ball over the bar.

On the touchline, Diego Simeone doubled over. Other bodies fell. That was the moment. Forty seconds later the final whistle sounded.

Simeone, usually the first down the tunnel, waited for his players as they left the pitch, one by one. They looked shocked, heads bowed and shoulders rolled forward. They had been that close. But they still were that close, right? There is another chance to come.

On the final day of the season, Atlético are three points clear at the top of the table. It is an astonishing achievement for a club whose budget is a fifth the size of Real Madrid’s or Barcelona’s and they are on the verge of doing what no one has done in a decade, and take the league from the big two.

All season, people have waited for the inevitable collapse, for Atlético to slip out of the race. But the team have refused. They need only to secure a draw to be champions.

Barcelona’s fate is in their own hands, just as Atlético’s is in theirs. For only the third time in history, and the first time in 53 years, two candidates face each other on the final day. No doubts, no permutations, no “ifs”. Barcelona versus Atlético, win the game and win the league.

The team that knocked Barca out of the Champions League was Atlético Madrid, which is cause for optimism at the Calderón. They have faced each other five times this season and Barcelona have not won: there have been four draws and one Atlético victory. Barcelona have scored just twice in the five games. A draw this time would make Atlético champions.

It is impossible to call. Who is the better team? Atlético, the team who had nothing to lose all season, have it all to lose for the first time. It would be cruel after an astonishing campaign. And after that comes the Champions League final against Real Madrid.
Guardian Service