Absence of fresh talent a worry as Robbie Keane bows out 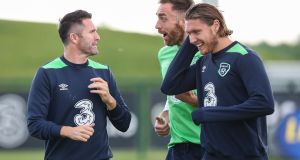 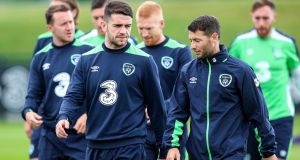 There was the inevitable mention of Gerd Müller and his 68 goals as Martin O’Neill prepared to bid farewell to Robbie Keane yesterday.

Another one for the Dubliner against Oman and he will equal the great German’s remarkable tally – never mind, for a moment, that the former Bayern Munich striker notched his lot up in eight not 18 years and in just 62 games before walking away suddenly in the wake of scoring the winner in the 1974 World Cup final.

It is easy to imagine how successive Ireland managers might have pestered the striker to return if he had tried to walk away, as Müller did.

The Germans, in any case, just pressed on and though Dieter Muller was no Gerd, he scored four goals in the just two games that constituted a team’s European Championships back then as the World Champions came within a whisker of completing the double.

Regardless of whether he equals, or even beats Muller’s record tonight, the now 36 -year-old was just as important to Ireland in his way since he was first capped at senior level back in early 1998. Plus, of course, he never walked away.

The player thanked the manager on Monday for the opportunity to say a proper goodbye to the Irish fans this evening and O’Neill revealed yesterday that he has invited Shay Given along so that his contribution might be recognised by the supporters too. The limits to the northerner’s sentimentality were revealed too, though, when he suggested that he was not yet certain whether the man of the moment might actually start. He certainly gave the impression, albeit humorously, that, with serious work to be done ahead of Monday’s game in Serbia, Keane might not get too long out there. “Is he one behind Gerd Muller?” O’Neill asked rhetorically. “Well, he’d better do it in the first 20 minutes of the game, otherwise he’s going to find time pressing.”

Indeed, time continues to press for several members of O’Neill’s squad but, with no great production line, the Ireland boss seems set to look to very much the same group as last time for what he predicts will be a particularly tough World Cup qualification campaign.

But the squad O’Neill named a week ago still served to highlight the lack of young talented Irish players eager, able and impatient to steal away the shirts of the players who inspired them.

The problem is not restricted to any one area of the pitch either with O’Neill saying that he had actively sought to persuade John O’Shea to stick around for fear the 35-year-old might decide his own day had come.

“I spoke to John and I said to him that there is still room of him here as a player,” he said.

“He has one year left on his contract at club level and I said to him that, if he was thinking of retiring, I wanted him to have second thoughts about it.”

O’Shea, like Walters, made a huge contribution to the last campaign but O’Neill could still do with one his younger defenders being better than the veteran Sunderland star in this campaign for that, when all the sentimentality of the situation is swept away, is the proper order of these things.

Far from throwing in youngsters – notwithstanding the fact that Callum O’Dowda might well get a game – the northerner finds himself having to use this evening’s game against Oman to give some long established players who are out of favour at their clubs game time with Aiden McGeady the most obvious case.

When he spoke on Monday, Robbie Keane himself highlighted the absence of opportunities for those now looking to follow in his footsteps and wondered how long the likes of himself, Richard Dunne and O’Shea might have had to wait for their chance in the Premier League if they had been starting out in their careers now.

It is an impossible one to answer but the situation for Irish youngsters is certainly bleak and, with the new campaign around the corner, the most worrying thing is that very, very few of the generation now looking to make that breakthrough have anything like their predecessors’ talent.

1 Solskjær praises Martial for building himself into ‘powerhouse’ centre forward
2 Angling Notes: Mutilated skate baffles experienced anglers
3 Andy Sullivan fights back tears as he wins English Championship
4 Why has it all gone wrong for Gareth Bale at Real Madrid?
5 Tyrone’s McShane ruled out for rest of the season
Real news has value SUBSCRIBE
Crossword Get access to over 6,000 interactive crosswords