Éder the unlikely hero as Portugal crowned kings of Europe 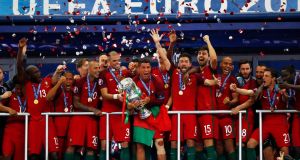 Portugal were crowned kings of Europe after beating France 1-0 after extra time at the Stade de France. Photograph: Reuters/Kai Pfaffenbach

Perhaps they won it for him in the end, the skipper who seemed hell bent of carrying his nation to a major title in the way that Eusebio and Luis Figo had tried but failed to do. Ronaldo , though, was a spectator, watching from the sidelines as Portugal finally turned history on its head and laid to rest of the enduring agony of 2004 at the Stade de France.

With their captain having departed injured early on, it was Lille striker Éder, a substitute whose statistics at this level suggested little by way of match changing ability, who dashed French dreams of another title won on home soil in the end with a low drive 19 minutes into extra time that he never should have been allowed to score.

The Portuguese were magnificent, though, for the way they hung on through the bad times, battling to stay on level terms and then seizing their chance to grab victory in the game that the French might really have won several times over.

Certainly they can have no complaints for the game seemed to be theirs for the taking for the best part of the night. Somehow, for reasons that will be argued and written about for years to come in these parts, they lacked the will or grit or knowhow to make the title theirs.

Just as it had in ‘98, the fate of this game’s Ronaldo looked set to have a massive bearing on the outcome. Back in that World Cup final, the Brazilian was played on the order of the federation chief when the coach knew he should not have featured and the striker, so often the star of the show, contributed nothing as the South Americans were well beaten.

Here, the modern day super star of the same name started a game that, many believed, he would have to dominate if Portugal were to win, but his night lasted just 25 minutes with most of those clearly spent battling the inevitable after Dimitri Payet’s follow through after an early challenge had clearly left in serious difficulty.

It was huge blow to a game whose promise he had been central to and seemed set, after a strong start by France to leave the hosts completely in the driving seat. Perhaps Didier Deschamps’ men felt it took a little of the urgency out of the situation, though, with the victory now somehow seen as almost inevitable for while they had the better of the rest of the half, they played in fits and starts from then on, disinclined it seemed to commit themselves too much to the pursuit of the game’s first goal.

An exception was Moussa Sissoko whose driving runs from midfield were comfortably the most memorable thing about the host nation’s opening half display and had, more than once, José Fonte living a little dangerously. There was the wonderful moment too when he stepped over a ball from Payet and spun around a momentarily bewildered Adrien Silva before blasting a shot straight at the goalkeeper. In this sort of form, the 26 year-old would cut quite a dash in the Championship.

Around him, his French team mates seemed, after the opening few minutes at least, to lack anything like the same sort of enery or commitment although there were moments that they sprang impressively to life as when Pepe made a mistake under pressure from Olivier Giroud and Payet played a first time ball into the path of Antoine Griezmann whose header required a very decent reaction save.

Portugal at this stage, were not exactly making life overly difficult for the hosts with William Carvalho doing very little to curtail their movement from midfield and young Renato Sanches looking more than a little fazed by it all.

But they hung in there and the teenager seemed to recover some of his confidence after clearly sidestepping a challenge from the generally anonymous Paul Pogba.

The French continued to have the better of the possession and create the best of the chances with Rui Patricio having to keep his side in it more than once but the Portuguese kept working and did enough to suggest that they did not feel they were in anyway beaten with Nani and Ricardo Quaresma both hinting at the threat they could pose on the break and the French never looking entirely convincing themselves when forced onto the back foot.

Still, with a minute or so of the 90 to play the host should have won it when André-Pierre Gignac wrong-footed Pepe then stepped inside to shoot but having beaten the goalkeeper, the shot came back off the foot of the post and the encounter stumbled on, uncertainly, into two periods of extra time.

Inevitably, it all became more anxious but it was Portugal who ultimately held their nerve and prevented a penalty shoot out. With just over 10 minutes remaining they worked their ball in from the left and the French stood off them all the way until finally Samuel Umtiti turned his back on a shot from 20 metres that Éder should never have been allowed to get away.

That matters little. With Lloris helpless, it reached the bottom left corner and though the French sought to come out fighting as Deschamps finally made his third change of the night by bringing on Anthony Martial, it will go down as the goal that made Portugal champions of Europe; a title they could scarcely have won in any more remarkable a fashion.

Dave Hannigan: Everyone believed they were on first name terms with Kobe Bryant 21:00
Holders UCC see off UCD to book spot in Fitzgibbon Cup semi-finals 20:38
Women’s hockey tour of South Africa ends with loss to Germany 19:49
Tiger Roll on course to bid for Grand National history 18:46
Sizing John to miss rest of season after suffering another injury 18:19

1 Who is Caelan Doris? Meet Ireland’s newest rugby star
2 Holders UCC see off UCD to book spot in Fitzgibbon Cup semi-finals
3 Winds of change as Ireland name a refreshed team, picked on form
4 Gordon D’Arcy: If Farrell can tap into our self-worth, we’re all on a winner
5 Clongowes calmly restore order after Terenure’s terrific start
Real news has value SUBSCRIBE
Crossword Get access to over 6,000 interactive crosswords