Inter Milan in negotiations to sign Christian Eriksen for €10m 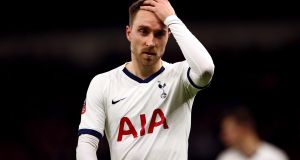 Christian Eriksen has told Inter that he wants to join them in this transfer window after the Serie A club started negotiations with Tottenham to sign the Danish international, who is out of contract in six months.

Inter have offered the Dane a four-year deal, which would be extended by another six months if they can persuade Tottenham to sell the player this month. Inter have begun talks with Tottenham and have offered an initial €10m (£8.5m) but Spurs are holding out for twice that amount.

The agent of the 27-year-old, Martin Schoots, held further discussions with the Italian club on Tuesday, telling them that the player would be keen to join them and that he would like to do so this month. Eriksen has been at Spurs since 2013 but said last summer that he was ready for a new challenge.

Eriksen played the full 90 minutes as Tottenham beat Middlesbrough in a third-round FA Cup replay on Tuesday night but there were boos from a section of the home crowd before the game when his name was read out. He was seen applauding the fans as he walked off and gave his shirt to a young fan after what could be his final appearance for Spurs.

Following the game, the Tottenham manager, José Mourinho, said: “If his decision is to leave, I think he has to leave with his head up - if he gives everything, which is what he tries to do for the team. Fans, it’s always to respect. We have to respect.”

Paris St-Germain are also interested in signing Eriksen but Inter are the firm favourites to sign the 27-year-old, having impressed the Dane with their vision for the team under the stewardship of Antonio Conte.