In bid to shoot the messenger, Benfica take aim at bloggers 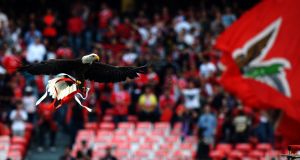 The blogger read the email at about 11p. on a quiet night in September, the time of day when he usually posts his popular musings about soccer in Portugal.

The message was from Google, Inc. In it, the company – or, more specifically, its lawyers – explained to the blogger, a slight man in his mid-30s, that the Portuguese soccer powerhouse SL Benfica had requested that Google hand over his personal details because he had published 13 articles containing confidential club information on a Google-owned platform.

The blogger had discovered the information online after it was revealed in a broader leak of Benfica documents, and had posted articles about it on his blog, O Artista do Dia. In doing so, he had unwittingly become a small part of a larger scandal that had become a major embarrassment for the club.

Benfica counts half of Portugal’s 10 million inhabitants as fans. It is the club of Eusebio, twice the champions of Europe. And now it wanted revenge.

Stunned, the blogger struggled to fall asleep after reading the email and its attachment – a subpoena from the US District Court for the Central District of California. When his wife and two children awoke the next day, he had not slept a wink.

He worried about Benfica’s “unlimited legal support” and about running afoul of the team’s most fanatical supporters, he said in a recent interview. He asked to remain anonymous because he believed he could be in danger.

“They could come to my employer; I don’t know what can happen,” he said, his voice trailing off. Then he quickly added, “My kids – I thought about it all.”

To understand how an unassuming blogger in Portugal ended up staring at a subpoena from a lawsuit in California – and as a pawn in litigation that will turn on the definition of privacy in a technological age – it helps to know how desperate things have become for Benfica since proprietary details about the inner workings of the club emerged last year. Among other things, the leaked documents suggested the club had a plan to influence league and federation officials and even control officiating in top-division matches. Benfica denies any wrongdoing.

Even in normal times, rumours and intrigue about events inside the Estádio de Luz, Benfica’s cavernous stadium and headquarters, dominate the many nightly debate shows on local television and the cover of at least one of Portugal’s three daily sports newspapers. Its rivalries with the country’s other top teams, Sporting and FC Porto, are famously fractious; vicious spats between club executives help to feed the daily narrative of fervour in this country.

The most recent trouble began in the spring of 2017, when Porto’s communications director, Francisco Marques, appeared on a team-owned television channel and revealed the inner workings of Benfica gleaned from a cache of club data secretly supplied to him. Then he did it again. And again. To soccer fans and journalists in Portugal, Marques’ weekly revelations about Benfica became must-see television.

About 20 gigabytes worth of internal documents and emails belonging to some of Benfica’s most senior officers had been shared with him anonymously, Marques said. The information presented on his show Universo Porto de Bancada was wide ranging. It included a Benfica slideshow detailing an apparent effort to gain greater influence over federation and league officials, as well as details of how the club spent a large sum of money on a witch doctor from Guinea-Bissau to boost the team’s performances. There were also documents suggesting connections between the club and the men responsible for overseeing refereeing in Portugal.

Marques passed the entire database, which he says he received anonymously, to the police. Then, in December 2017, Benfica emails started to appear on a mysterious website called O Mercado do Benfica, or The Benfica Market. Ever since, the site’s contents have been devoured by local news media and blogs including, though not limited to, O Artista do Dia.

“I think it’s the same person who spoke to me that published the emails,” Marques said in an interview, insisting that neither he nor Porto had paid for the data.

The police are investigating the hack on Benfica’s system, but also the club itself. Law enforcement officials have conducted raids on Benfica’s offices, and last month prosecutors charged the club with corruption after investigators found it had a mole inside the Portuguese judicial system. The official, prosecutors contend, tipped off Benfica about ongoing investigations but also to those involving Porto and Sporting.

The Portuguese soccer federation has started a separate investigation. Benfica’s president, Luis Filipe Vieira, who was charged in January with corruption related to his business affairs, has said that the club will defend its reputation “in an uncompromising manner” and that there was “not a single fact, not even circumstantial evidence, that would implicate Benfica”.

Those who have published articles and blogs based on the leaked material argue there is a significant public interest in doing so, given the team’s immense social and cultural importance in Portugal.

Benfica’s view of the leaks is starkly different. In April, the club sued numerous tech companies, including Google, in an attempt to compel them to provide Benfica with confidential information that would help it identify individual bloggers and website owners. In total, Benfica is targeting as many as 100 people.

“Benfica was the victim of a robbery and disclosure of its private correspondence, first by a local television channel linked to a rival club, Futebol Clube do Porto, and, later, in the face of a decision of the court that forbade this disclosure, these emails, many of them distorted, began to be issued by blogs attached to rival clubs,” the team said in a statement.

The club also contends information gleaned from its emails has been “distorted” and “altered,” violating any “public interest or right to information” defence.

Until it sent him details of the subpoena, Google had not been in touch with the blogger to ask him to take down any posts or material that may have breached its guidelines. (He is embroiled in the legal battle because the site that hosts his blog, Blogspot, is owned by Google.) Google’s terms of use warn users against publishing “personal and confidential information”. The company has not revealed his identity to Benfica yet, but it could if ordered to do so by the court; it declined to comment on the blogger’s case other than to say the company would comply with the law.

Sitting at a table in a cafe at Lisbon’s international airport one recent afternoon, the blogger, known as “John Doe 2” in the California lawsuit, produced a sheaf of documents from a backpack, including copies of blog articles he has posted about Benfica, and the email from Google. It said he had until October 8th to “file a motion to quash” or any other formal objection to the subpoena.

He missed that deadline and is now contemplating his next move. While Benfica has the financial might to engage a team of lawyers, the blogger had not yet secured representation to defend his interests in the US. That has left him reliant on solely his own efforts; recently, he sent Google an impassioned email, pleading with the company not to surrender his personal information to the club.

He acknowledged being a fan of Benfica’s rival Sporting, but he rejected Benfica’s claim that he is part of an organised network conspiring to damage its reputation. What started out as a late-night hobby, a chance to unwind after putting the kids to bed, is now a significant problem subject to forces he cannot control. He delayed telling his wife about the legal time bomb that dropped into his inbox, preferring to save her from worrying about what Benfica might do, too.

“I believe they want to know my identity so they can intimidate me,” he said. “They are perfectly aware that my blog has nothing to do with any type of illegal access to their data that ended up in the email leakage.” - New York Times

Solskjær says Man United did not deserve to beat Southampton 06:36
Gerry Thornley: Munster will make for interesting case study when rugby resumes 06:30
James McClean says he gets no support for abuse he receives 06:34
Tiger Woods returns as Rory McIlroy battles to hold world number one spot 06:00
Different Strokes: Day looks in the mirror and sees the light 06:00