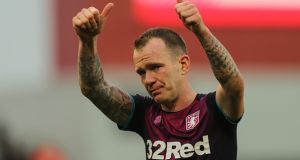 Glenn Whelan is back in the Ireland squad. Photograph: Getty Images

Pádraig Amond, James Collins and Jimmy Dunne are all included in Mick McCarthy’s preliminary squad for the European Championship games against Gibraltar and Georgia.

Glenn Whelan also returns despite Martin O’Neill having made clear that the player was not in his plans and the FAI having effectively billed last year’s game against Northern Ireland as his farewell to the international game.

The 35 year-old made it clear at the time that he was not retiring and that he would always be available to an Ireland manager who wanted to select him. McCarthy says that as the Dubliner is playing well at Aston Villa he is worthy of consideration and that even if he does not feature in this month’s games, he wants to have the option of using him, if required over the course of the campaign.

“I rang him and asked him if he had retired and he said ‘no,’ he hadn’t,” said McCarthy as he named the squad at the headquarters of association sponsors Three in Dublin. “He’s playing very well. He’s playing with [Conor] Hourihane as well so there’s a bit of a partnership there.”

James McCarthy also returns after a long time out injured but the manager suggested that he will need to get some first team football under his belt before he can hope to reclaim his international place. For now, it is not clear if will even survive the cutting of this squad from 38 to 23 at some stage over the next week and a half.

Asked why he had named so many players to start with, he observed: “I’ve not named before so if I don’t now, they might think I’m not interested.”

The manager says that Patrick Bamford remains positive about declaring for Ireland and that the pair were in touch in the wake of the striker scoring two goals for his club, Leeds United, at the weekend.

“I asked him if he still wanted to join us and he said ‘yes’ and so we are going to meet up,” he said. “It’s going to be June now because we are not going to get him for these games and I stressed to him that if we were going to get it done for June, we’d need to get going asap.”

In the meantime, he says, he has been impressed by the club form of Newport’s Amond and Luton’s Collins. “Both of them have scored goals at their respective levels and their records are good, wherever they have been. Pádraig Amond has been brought to everybody’s attention because of the goals he has scored in the FA Cup. I tend not to pay too much attention to goals like that but he has been scoring them all season for his club.”

McCarthy has been out to Gibraltar to have a look at the stadium where Ireland will play on the 23rd and insists that he has no issues with it.

“I wanted to get a feel for it and the surroundings which I’ve done,” he said. “It’s a small stadium. It’s an Astroturf pitch. The surface changes things slightly, the recovery times are different, but I’m not bemoaning the pitch at all.

“It’s an unusual place to be playing, certainly compared to the stadiums that the player are used to play in now but it’s their stadium, they’ve done a job on it to get it ready and now we’ve got to go there now and play.”

*Indicates player is on loan