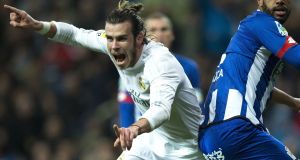 Gareth Bale insisted he is happy at Real Madrid after scoring a hat-trick on Zinedine Zidane’s managerial debut at the Santiago Bernabéu – but admitted he was disappointed Rafael Benítez was sacked and that it is impossible to predict where his own future lies.

Bale scored three goals in a 5-0 victory over Deportivo de La Coruña, leaving the pitch to a standing ovation from the Real Madrid fans and departing the stadium with the match ball under his arm, signed by his team-mates. It was his second hat-trick in four games and he has now scored 10 times in seven. No player in La Liga has provided as many assists this season.

The sports daily AS called Bale “colossal”, while Marca went for “fabulous”, the veteran match reporter Santiago Segurola writing: “Bale produced his best game at Real Madrid, and as good as any of those [produced] by the great stars of this club.”

Zidane said: “Gareth should be very happy with the way he has played; it is not easy to score three goals.” Asked what he wanted from Bale now, the Frenchman replied: “For him to carry on like this.”

Bale said: “I had a very good relationship with Rafa. Obviously, it was a big disappointment to see him go but things like this happen in football: you’re professional and you get on with it, and carry on.”

Asked directly if he was happy and planned to stay at the club, he responded: “I’m happy at the moment. Obviously, you can never predict what happens in the future but I’m enjoying my football at the moment, so I’ll keep going.”

The Wales captain, who admitted that he did not know if Zidane’s signature was among those scribbled on the ball, insisted that he had not had a point to make to his new manager, despite having been unhappy at the sacking of Benítez on January 4th.

The Real Madrid president Florentino Perez was aware that Bale was one of the few players in the squad who wanted Benítez to continue and that he was concerned by the change. So, too, was the new manager.

“I understand that he can be annoyed with the departure of Benítez because he was an important coach for him but he is going to have the same affection [from me] as with Rafa,” Zidane said. “He is important for the squad, fundamental for the team. He is phenomenal and what he has been doing recently is fantastic. I’m going to give him all my affection and support so that he plays well.”

The message was not only for public consumption. “That [was] nice of him to say. We had a chat when he first came in,” Bale revealed. “No matter what, I’ll always give 100 per cent on a football pitch and that’s what I did tonight.”

Bale had been concerned that the change of manager would result in him returning to the wing. If that happens, he will consider where his future lies. All three goals came with him in a more central position as he produced arguably his best all-round display since joining the club for a world record transfer fee.

“There have been comments in previous interviews and stuff [commenting on the fact that] I’ve been stuck on the right, and I didn’t have that freedom but now on the right I’m able to come in and float around a bit as well.

“My best position is being able to roam around the front and try and find weaknesses in the defence, I suppose. Everybody knows where I like to play and what I like to do on the pitch, and hopefully I can keep doing it.” Guardian Service