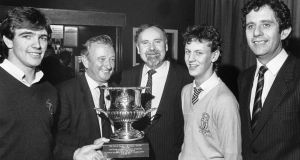 Derek Jones (second from left) at a reception for the annual Blues soccer match for the David Faiers memorial trophy in 1984. Photo: Pat Langan/The Irish Times

Derek Jones, a former sports reporter with the Daily Express and Irish Times has died. One of 14 founder members of the Soccer Writers’ Association of Ireland (SWAI) in 1960, he was president from 1970 to 1972.

Jones succeeded Sherwood as the Republic of Ireland sports correspondent for the Daily Express writing on soccer in particular and travelling extensively in reporting on European club and international matches. He also covered golf and rugby. He was noted for a racy turn of phrase, on one occasion memorably describing former Cork Celtic winger Paul O’Donovan as the “barrel-chested Leeside Leprechaun.”

When most of the British newspapers decided to do away with their Irish-based operatives Jones joined the Irish Times, for whom he became the rowing correspondent, while continuing to write on soccer, golf and rugby. He remained with the paper until his retirement.

He played tennis in Blackrock Bowling & Tennis club before moving to Elm Park, where he also took to the fairways in golf.

He is predeceased by his wife Vivienne. We extend our deepest sympathies to his daughter, Ali sons, Mark and Jeff, and to his extended family and friends. Ar dheis Dé go raibh a anam dílis.