Officials turned to fans, businesses and even players’ children to warn players about Covid-19 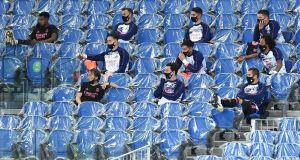 As coronavirus infection rates in Spain started to rise again recently, so did the anxiety among the leaders of Spain’s top soccer league. Earlier this summer, La Liga had successfully navigated the conclusion of its pandemic-interrupted 2019-20 season, a campaign that had been mothballed for several months after the country imposed a national state of emergency. But as they returned to the field, they emerged into a changed world.

Finishing the final weeks of a suspended season had been one thing, a matter of strict rules, dire warnings and careful planning. Playing an entire new campaign was already keeping league and team officials up nights.

Spain’s infection rate has recently started to climb alarmingly. Last Wednesday, the country recorded 239 deaths, the highest daily number in months. On Friday, new lockdowns were ordered for about 850,000 residents of Madrid.

“The situation is much worse,” said Victor Martin, La Liga’s chief of staff. So on Monday the league arranged a video conference with representatives of the teams from the country’s top two divisions. Staring into computer screens, officials reiterated what they had been telling the teams privately in face-to-face meetings: If the league season is to run to completion, if its billion-euro television contracts are to remain in place, if the players and the team executives and their staff members want to continue to extract livings from the game and keep their families safe, there simply can be no let up, no relaxation in the precautions imposed to avoid the surge of coronavirus cases in Spain overwhelming the league, too.

They made their case in statistics and charts. But to spread the message, and to ensure players don’t tune out yet more warnings from yet more men in suits, they are enlisting a non-traditional coalition of messengers that includes individual fans who have recovered from Covid-19 and at least one concierge service that already provide them with luxury services. And in perhaps the most intriguing approach, they have even enlisted the players’ children.

To do so, La Liga has arranged for special coronavirus packs to be sent to players’ homes each week. The package includes flyers detailing health recommendations in a child-friendly format and brightly coloured Liga-branded bracelets and key chains filled with hand sanitiser. The hope is that, by introducing and reinforcing good habits through the players’ children and their families, everyone will benefit.

“Awareness, awareness, awareness,” Martin said, to explain the idea. “We are very concerned because of the situation in Spain, there are so many infections, and kids, who are mostly asymptomatic, could come back home and they can infect the players and no one realises.”

Last week’s conference call with the teams painted a stark picture of Spain’s worrisome state. Armed with slides detailing the worsening epidemiological situation in 25 cities and regions, La Liga officials emphasised that in every case, the environment that teams were returning to in their home cities was starkly different from the one they played in between June and July, when a first wave of coronavirus cases had largely been brought under control. One chart showed enormous tower blocks depicting the rising daily caseloads contrasted with barely perceptible bumps when the league resumed play in midsummer.

To address the new reality, La Liga told the teams that it was imposing some of its strictest virus protocols to date. Perhaps the most significant of the new measures relates to each teams’ most sacred space: the dressingroom. This season, dressingrooms in La Liga will be almost completely off limits, with players encouraged to change at home. Showers will be forbidden, and team talks that sometimes stretched for up to an hour before and after matches and training sessions will now be limited to only a few minutes, with a maximum of 10 minutes allowed at half-time.

“They won’t have time for a full mass any longer,” Martin said, trying to make light of a difficult conversation with teams. “They will have to make do with a short prayer.” The decision came after health officials quickly identified dressingrooms as a significant vector of transmission, a fact underlined by an outbreak that overwhelmed the second division team Fuenlabrada in July, with 28 players and officials infected at the same time.

In the brief break between the end of last season and the start of the current campaign on September 12th, teams have registered 126 positive cases, according to La Liga. But no team has seen cases devolve into a mass-spread situation, a crisis averted, league officials said, in part because of the imposition of the dressingroom ban at the start of preseason training and games.

But the league is now expanding its focus on athletes’ home lives, too, with a particular emphasis on their children, who are now back in school, exposed to hundreds of their peers each day. In addition to the gift packs sent to the players’ children at their homes, teams will arrange for players, who until now have been recipients of coronavirus messaging, to appear via video conferences at schools around Spain, including those their own children attend.

A separate effort is being carried out in association with a company called Club del Deportista, a lifestyle and luxury concierge service that for the past 16 years has catered to the needs and whims of millionaire athletes and their families. Among the promotions for high-end clothing lines, car services and private dining experiences it usually offers, the company is now sharing the league’s latest coronavirus updates and reminders of the need to remain vigilant.

The idea, La Liga’s Martin said, was to communicate with players through a channel that is already popular with them – this spring, panicked players used Club del Deportista to source scarce supplies of hand sanitiser, masks and coronavirus tests – and not to bombard them with months and months of official league messaging.

The players, a company official said, are already engaging. “They are also people, they have families, they also feel unsafe, and they are very worried,” Gonzalo Moreno, a partner at Club del Deportista, said in an interview. “Football is very important, they have big salaries, so they are not only worried about being healthy but also about the business. Without it, they don’t have work.” – New York Times

1 Shock at golf clubs as sport faces shutdown in Level 5
2 Dan Martin toasting another stage win at the Vuelta
3 Andy Farrell reshuffles his hand for rescheduled Italy game
4 GAA scrambling to deal with GPA demand for ‘baseline testing’ of all county panels
5 Ireland 5 Germany 2: When Nazi salutes took over Dalymount Park
Real news has value SUBSCRIBE
Crossword Get access to over 6,000 interactive crosswords