FAI request a delay at their next Dáil appearance 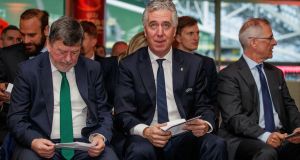 The FAI has, like Sport Ireland, asked for its return to the Joint Oireachtas Committee on Tourism, Transport and Sport to be delayed citing scheduling issues and a desire for the first of the reports into its finances, currently being completed by KOSI, to be published before its representatives update the politicians on recent developments at the association.

Committee chair Fergus O’Dowd had suggested in a radio interview this week that he was keen to see the association’s senior personnel provide detail on the circumstances around John Delaney’s resignation last weekend and an invitation had been sent suggesting that they come to the Dáil on October 16th.

However, chief operating officer Rea Walshe, who also serves as company secretary at the organisation, has replied suggesting that the date will not work as some of those expected to attend may not have returned from the senior international game in Geneva the night before.

“We also note that Sport Ireland have requested that their meeting scheduled for the same day be postponed until after the release of the Kosi report,” she writes, in her reply to the invitation, “and we would ask the same, particularly in circumstances where our independent directors including the Independent Chair are due to be appointed in the coming weeks.”

The FAI’s appearance before the committee on April 10th, was a key turning point in Delaney’s fortunes with the former chief executive badly damaged by his decision, based on his legal advice, he claimed, not to answer the questions put to him by the politicians.

With the selection process for the new independent directors almost complete – a final shortlist of 12 was being worked through this week apparently, ahead of a board meeting next Tuesday – the association is expected to advertise for a new chief executive this month.