Would Arsenal without Arsène plunge into post-Ferguson chaos? 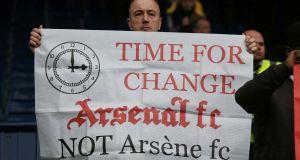 Arsenal fans hold up anti-Arsene Wenger signs after the defeat against West Bromwich Albion at The Hawthorns. Photograph: Getty Images

On Arsène Wenger, everything is divided, even the news. Just as Bild was reporting there has been contact between representatives of Arsenal and the Borussia Dortmund coach, Thomas Tuchel – no great shock given recent uncertainty but an indication the board is perhaps not quite so supine as it can at times seem – so it was emerging the decision Wenger trailed after Saturday’s defeat by West Bromwich Albion is that he wishes to stay. The handful of people in Britain qualified to fly planes dragging banners must be delighted.

The Wenger situation has been discussed so often it is hard not to approach it with a sense of weariness. That he is no longer the bright innovator he was when he arrived 20 years ago, that football has caught him up and passed him by, seems obvious. So, too, is the fact he is a decent man and manager.

That the protests of a few dozen diehards insisting he is “killing our club” have received so much attention is symptomatic of a culture that favours those who shout loudest, however extreme, illogical or distasteful their opinions. This, perhaps, is the curse of the social media age: the liberal sentiment that all views must be heard conspires with clickbait sensationalism to repackage the rule of the mob as the wisdom of crowds.

But that is an argument about the argument rather than an argument itself. Should Wenger go? The fear his departure could plunge Arsenal into the same sort of fretting that continues to undermine Manchester United three and a half seasons after the departure of Alex Ferguson is real enough, particularly for Arsenal shareholders, who have become used to the income generated by habitual qualification for the Champions League – even if, 13 years after their last league title, there seems ostensibly less to lose.

That the removal of the head leaves such a vacuum speaks of the failure of Ferguson and Wenger, the last of English football’s great autocrats, to put a modern management structure in place.

And there is a chance Wenger’s conservatism pays off. The move to the new stadium necessitated careful husbandry but it goes beyond that. Wenger’s unwillingness to spend beyond what he perceives as the market rate for players has been a great source of frustration for fans but his scepticism about the boom in broadcast rights may end up being justified.

Football over the past decade or two has seemed weirdly immune to wider economic trends but if a crash should come, if football turns out to have been a bubble, the club with £226m sitting in the bank will be in a position to clean up (although you hope they have converted it to something less insecure than sterling).

Then you look at the state of Arsenal. It would be touching, appropriate even, if Wenger could go out with an implausible triumph at the last, the equivalent of Jack Nicklaus’s Masters win in 1986 or Steve Waugh’s farewell 80 at the SCG, but there is no realistic prospect of Arsenal winning the league next season.

The three biggest signings have not done as hoped and taken the club to the next level: Alexis Sánchez will surely leave in the summer, Mesut Özil has not signed his contract (although it is far from clear any European club who could afford his wages would want him) and Granit Xhaka has struggled badly.

Just as disappointingly, the many young prospects – Theo Walcott, Kieran Gibbs, Francis Coquelin, Calum Chambers, Alex Oxlade-Chamberlain – have stagnated to the point where they are no longer either young or prospects. Demoralisation and indiscipline haunt every attempt to defend a set piece or a counterattack. The decay is palpable.

Major surgery is necessary, whether it is Wenger in charge or somebody else – and it may even be that it is a sense he cannot hand over the club when they are in such a mess that has persuaded him to stay on. Acknowledging the salary would be a draw, who among the realistic candidates would want the job?

Tuchel has a bright young squad at Borussia Dortmund and maybe a point to prove after a season ruined at its outset by a catalogue of injuries. Jorge Sampaoli speaks no English and, as his Sevilla falter, perhaps feels he has unfinished business there. Diego Simeone will leave Atlético Madrid at some point – and intriguingly used the English word “fixture” on Sunday – but his style seems antithetical to the ethos Wenger has developed.

Eddie Howe, as the leading English candidate, may fancy the step up but, given how badly his one previous stint away from Bournemouth went and his lack of big-club experience, he would be a major gamble.

Something similar might be said of RB Leipzig’s Ralph Hasenhüttl or Hoffenheim’s Julian Nagelsmann – both bold choices and exciting managers but with a limited body of work at a high level. Would an exhausted Luis Enrique really want to get straight back on the treadmill, especially at a club that needs so much work? Would Leonardo Jardim want to leave an exciting Monaco at this stage?

And that is the problem Arsenal have created for themselves. By delaying an awkward decision so long, they have allowed the club to become less attractive to potential successors than it ought to be.