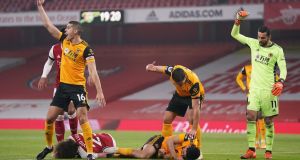 Raul Jimenez has undergone surgery on a fractured skull after a collision with David Luiz during Wolves’ win over Arsenal. Photograph: John Walton/EPA

The Mexican received lengthy treatment on the pitch after a sickening clash of heads with Arsenal defender David Luiz at the Emirates Stadium on Sunday before being taken to hospital.

Wolves released an update on Jiménez’s condition on Monday morning, saying on their official website: “Raul is comfortable following an operation last night, which he underwent in a London hospital.

“He has since seen his partner Daniela and is now resting. He will remain under observation for a few days while he begins his recovery.

“The club would like to thank the medical staff at Arsenal, the NHS paramedics, hospital staff and surgeons who, through their skill and early response, were of such help.

“The club ask that Raul and his family are now afforded a period of space and privacy, before any further updates are provided in due course.”

The seriousness of the first-half clash during Wolves’ 2-1 win at the Emirates Stadium was immediately clear from the reaction of both sets of players and Jiménez was given oxygen before being carried off.

Arsenal have faced criticism for allowing Luiz to play on with a bandaged head only to withdraw him at half-time, although the club insist protocol was followed.

Wolves boss Nuno Espirito Santo told Sky Sports after the match: “You start hearing code red. It’s serious. It was a bad moment for everybody. You see panic in their (the medical staff’s) eyes and you start thinking how is he?”

Defender Conor Coady was closest to the clash, and said: “I jumped with him and you hear it, and as they dropped... obviously he was on his side and I think it was important we kept him on his side.

“It’s something we never want to see, with one of our team-mates or with

Jiménez joined Wolves, initially on loan, from Benfica in the summer of 2018 and has scored 44 goals in all competitions.