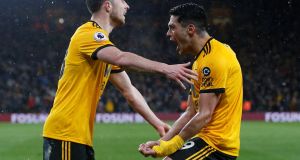 Wolves have confirmed the club-record £30 (€35m) signing of Raúl Jiménez from Benfica. The striker’s move will become a permanent one in the summer when his season-long loan expires at the end of June. Jiménez, who has been a revelation for Wolves this season, has agreed a four-year contract.

The 27-year-old striker has scored 12 times in the Premier League and also has seven assists, including a hand in both goals in the 2-1 victory against Manchester United on Tuesday. His partnership with Diogo Jota has proved particularly successful during the second half of the campaign and Wolves supporters will welcome the prospect of the two playing up front together again next season.

Jiménez failed to hold down a regular place for Benfica last season, scoring eight times, and the Mexican had never really been prolific across the previous three years in Europe, not helped by the fact that he spent so much time on the substitutes’ bench.

Wolves, however, felt that Jiménez had the attributes to succeed as a No 9 in the Premier League – he is 6ft 2in, mobile and has excellent close control – and their faith has been rewarded.