Will Solskjær be just another on growing list of failures? 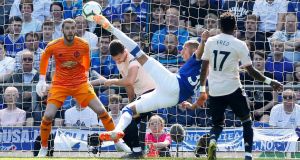 For those with long memories the irony inherent in Richarlison’s marvellous opening goal for Everton against Manchester United was the way his overhead kick evoked the image of Denis Law defying gravity as he rose in a whirl of limbs.

There were no Brazilians in the English game then, so the Scot’s combination of opportunism, athleticism and deadly marksmanship was something rare and precious, whether or not you were a Manchester United fan. The fact such a goal was being scored against United on Sunday, triggering their fifth consecutive away defeat, symbolised their plight.

This being Easter there was also the thought that the club, rather than experiencing a resurrection under their new manager, might still be stumbling between their very own Stations of the Cross.

Watching Ole Gunnar Solskjær on the bench, unable to disrupt Everton’s momentum, and listening to him speak afterwards of players who were not giving everything for the cause evoked other memories: those of the managers who came and went at Old Trafford in a long, grim and often turbulent procession between the retirement of Matt Busby in 1969 and the arrival of Alex Ferguson in 1986.

There were five of them. The first was Wilf McGuinness, Busby’s protégé, who proved unable to handle the big personalities in a dressing room where he had once been a junior player.

The second was Frank O’Farrell, a strait-laced Irishman who had taken Leicester to an FA Cup final and promotion back to the top flight but proved unable to cope with George Best’s idiosyncrasies. The club were third from bottom when he was sacked after 18 months.

The next choice, Tommy Docherty, came out of a very different mould: a Scottish wheeler-dealer, a big personality and a controversialist who brought the club an FA Cup and a Second Division title in 4½ seasons while also, in Bobby Charlton’s words, making United “the laughing stock of the football world”.

Dave Sexton represented another swing of the pendulum. Recruited from Chelsea, where his teams had included Peter Osgood and Alan Hudson, a fine and serious-minded coach was accused by United’s fans of draining the team’s flair.

Ron Atkinson, the impresario of West Brom’s Three Degrees, cheered things up for a while, delivering two FA Cup wins and five successive top-four finishes but was sacked with United in the bottom four.

Five men who failed, their various trials and tribulations greatly enlivening the back pages over a span of 17 years.

Solskjær is United’s fourth manager in the six years since the retirement of the man who brought them 13 Premier League titles, five FA Cups and two European Cups. So far the haul since Ferguson amounts to one FA Cup (Louis van Gaal), one Europa League (José Mourinho) and one League Cup (also Mourinho) – plus, of course, an endless supply of stories for the sports pages, of which this is merely the latest.

Can Solskjær become something more than just one more figure in the parade of fill-ins until the arrival of the next redeemer? Or will his appointment turn out to be the latest in a series of poor decisions laid at the doorstep of Ed Woodward, the chartered accountant with no football background given the all-powerful executive vice-chairmanship as a reward for his role in the Glazers’ takeover?

The Norwegian made an ideal caretaker. The Christmas lights came on, the smiles returned, he became the first United manager since Busby to win his first five league games, and eight away wins on the spin brought him a club record.

The miracle of Parc des Princes inspired the decision to make his appointment permanent, although it was not announced until after the two succeeding games, his first league defeats, which might have sounded an alarm bell somewhere. And now we see how fast things can change.

It is hard to believe that the team who won at Tottenham and Arsenal in January are really as rotten to the core as some would have us believe, using phrases like “poison in the recipe” (Louis Saha) and “Japanese knotweed attacking the foundations” (Gary Neville, who added he “doesn’t need to name names” despite being paid, via our Sky Sports subscriptions, to do exactly that).

While it is true the non-performance of the absurdly overpaid Alexis Sánchez is the kind of thing that can destabilise any dressing room, it did not seem to matter in Solskjær’s first couple of months.

Before December there was no evidence to suggest he would be a plausible candidate for the longer term. Banging on about the Camp Nou in 1999 before last week’s spineless defeat by Barcelona did nothing to suggest he has constructive ideas of his own; ditto some of his selections and substitutions. And in blaming the players on Sunday he sounded like Mourinho, the very man he is supposed not to be.

If United were now to live up to their historic self-image they would do as Busby and Ferguson did and make a marquee signing – a Law, a Keane, a Van Persie – whatever the cost.

Of course, as Sánchez demonstrated, it has to be the right one. Last October, as the Mourinho era lumbered towards its close, this column suggested N’Golo Kanté would be the ideal acquisition, sorting out the midfield’s defensive problems and perking up Paul Pogba in the process.

If it took £100 million and a Sánchez-level salary to prise him away from Chelsea, it would be cheap at twice the price. Big, bold steps are required, but history suggests it may be some time before United have the ownership and management capable of getting them right.