Will José Mourinho be able to stop Manchester City?

To keep the title race alive, Manchester United must put an end to City’s winning run 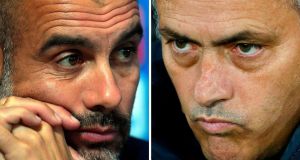 Manchester City manager Pep Guardiola and Manchester United manager Jose Mourinho. City can create an 11-point gap at the top of the table if they beat United on Sunday. Photograph: Getty Images

This, it feels, is it. It may only be the second weekend of December but if Manchester United lose at home to Manchester City on Sunday the gap at the top of the table will be 11 points and the title race – and José Mourinho’s record of always winning the league in his second season at a club – will be as good as over.

Events have a habit of getting in the way of even the most sophisticated projections but if City were to win a 14th Premier League game in a row – a record for one season – it could have profound consequences well beyond the end of this campaign.

With the Pep Guardiola model established, his squad packed with technically gifted and tactically aware devotees, City’s level is set. Given Mourinho’s habitual third-season problems, the likelihood of further upheaval at Chelsea in the summer and perhaps mounting dissatisfaction among Tottenham’s young players as they see their peers earning far more elsewhere, City may find themselves without a serious challenger in the short-to-medium term.

So how does Mourinho go about stopping City and checking the relentless march of the Pep-bots? City’s last three games, against West Ham, Southampton and Huddersfield, were all won 2-1 with a late goal and have all followed a similar pattern. Sit deep against City, limit the space Raheem Sterling and Leroy Sané have to accelerate into and, even with passers as gifted as David Silva and Kevin De Bruyne, they can be restricted.

As yet, nobody since Everton has been able to restrict them enough to achieve anything other than narrow late defeat but there have at least been signs they are not entirely unstoppable.

Happily for Mourinho, sitting deep, packing the midfield and allowing the opposition possession sits exactly into his protocol for away games against top sides, as revealed by Diego Torres in his biography of the former Real Madrid coach, and as practised with stultifying efficiency against Liverpool this season.

Less happily, this is at home, and while the Old Trafford crowd will probably accept a radically reactive approach if it is successful, it’s not hard to imagine unease being provoked if it is not. Less happily still, the main thrust of that 10-point plan is that “he who has the ball has fear”. City, with a pass completion rate of 88.8 per cent this season, do not look like a team with much fear of the ball.

Mourinho has tended to deploy a back three this season only against other sides playing a back three – CSKA Moscow, Arsenal, Watford, Chelsea, Tottenham – but, if only for reasons of personnel he seems likely to use a back three on Sunday. If Marouane Fellaini is fit, there is a chance he will play him alongside Nemanja Matic at the back of midfield with Ander Herrera breaking forward in a 4-3-3/4-2-3-1 hybrid but it is hard to imagine he would be bold enough to use a 4-2-3-1 with four creative players. Having an additional spare man at the back should anyway make it easier to pack that key area just outside the penalty area where City cannot be allowed space.

If United are able to stifle City, there is plenty of evidence they can score against them. The nature of Guardiola’s philosophy means his side will always be vulnerable if you can get through the initial press. Most sides can’t, or are so overwhelmed by the challenge of coping with City’s movement they are too befuddled to take advantage when they do generate openings – or, rather, openings to generate openings – which is why City have the second-best defensive record in the league but they have conceded in each of their last three league games.

Against Watford and Arsenal, the link-up between Paul Pogba and Jesse Lingard was exceptional and the suspended French midfielder will be missed at least in that regard. Questions persist about whether he really controls the midfield as a player of his stature and ability should but Pogba is a master at leading a break and linking the back of the team to the front. In his absence, United may have to go more direct, using Lukaku’s aerial ability to win knockdowns for Anthony Martial and Lingard.

That brought the winner in the home game against Tottenham, when United sat deep and were largely content to frustrate, and, while it’s unlikely City would succumb to quite such a simple goal as Spurs did, Martial and Lingard running from deep would be a huge test of Fernandinho’s defensive capacities specifically and City’s defensive organisation in general.

But the sense is that this isn’t really about City stopping United from scoring. The game will be decided on how well United are able to resist City’s endless waves of attack. And on that might rest the next three to four years of English football.