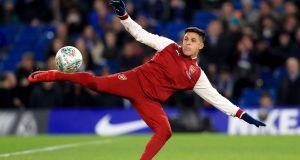 Arsène Wenger has made it clear that he expects to swap Alexis Sánchez for Manchester United’s Henrikh Mkhitaryan, as he described this transfer window as “more disturbing” and “more destabilising” than ever for Arsenal.

The manager was unusually open when discussing transfer business on Thursday, which reflected his level of certainty on a number of issues – chief among them Sánchez and Mkhitaryan.

Wenger said that Sánchez’s transfer to Old Trafford was not guaranteed but “likely to happen” – and quickly, possibly in the next 24 to 48 hours. He spoke candidly on Mkhitaryan, too, saying it was his understanding that the attacking midfielder would be moving in the opposite direction. He added that Arsenal had no problem about meeting Mkhitaryan’s wage demands.

Arsenal would still be on the market for another attacking player and they retain a strong interest in Borussia Dortmund’s Pierre-Emerick Aubameyang. Wenger, however, appeared to rule out a move for the Bordeaux winger Malcom.

On Sánchez, Wenger said: “I’ve worked on transfers for 30 years, so it is likely to happen. But at any moment, at any minute, things can break down. That’s how the transfer market is. As long as it’s not over the line, you have to accept that it can, as well, not happen. It’s now in the next 24 to 48 hours that it will happen or not.”

Wenger did not sell Sánchez last August to Manchester City – after accepting a £60m offer – because he was unable to sign a replacement. This time, Mkhitaryan is set to smooth the deal.

Wenger was asked whether Mkhitaryan would come as part of the Sánchez move. “It’s my understanding, yes,” he said. “If it’s a possibility, it’s because I like the player. We played many times against him when he was at Dortmund. He certainly appreciated the quality of our game and the way we play football.

“The wages would not be a problem. Look, this would be an exchange of players and I think one would replace the other. Are we still on the transfer market after that? Yes.”

The Arsenal hierarchy are convinced that Dortmund are ready to sell Aubameyang. The question is whether they will do so now or in the summer. Dortmund are desperate to qualify for the Champions League and would need to replace their top scorer if they decided to take the money for him in January.

“I have nothing to add [ON AUBAMEYANG],” Wenger said. “These kind of things, it’s better when it’s secret and when you don’t come out on it, and when you announce it when it’s over the line.”

On Malcom, Wenger said: “Will we sign him in January? I don’t think so.”

Wenger said that Arsenal had done “the maximum we could afford to do” in terms of their contract offer to Sánchez and he accepted that they simply could not compete with United – or City – on wages.

Wenger said he had no problem with Sánchez chasing the best financial deal. “No, because they are professional players,” he said. “I have no problem with Alexis Sánchez. His attitude has been outstanding with us. He was in training yesterday, fully committed and prepared 100% … He’s 29-years-old and the next contract will, of course, be very important for him.”

With Sánchez, Mesut Özil and Jack Wilshere in the final six months of their contracts, Wenger admitted that this month had been uniquely challenging.

“For us especially this period has been more disturbing than ever,” he said. “Why? Because we have big players that are at the end of their contracts and that is the first time that it happens. It has been more destabilising than ever.”