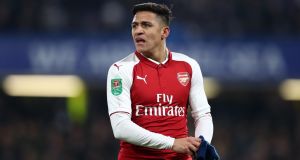 Alexis Sánchez: he was allowed to leave the team hotel on Friday night after being told there had been a breakthrough in negotiations over his transfer to Manchester United. Photograph: Getty Images

Arsène Wenger has admitted the uncertainty surrounding Alexis Sánchez’s future at Arsenal affected his team’s morale in the first half of the season, but insisted he has no regrets over his handling of the situation.

Sánchez was initially named in Arsenal’s match-day squad to face Crystal Palace on Saturday, only to be allowed to leave the team hotel late on Friday night after being told by Wenger that there had been a breakthrough in negotiations over his transfer to Manchester United.

The Chile forward was allowed to travel north to complete his medical while Mesut Özil and Jack Wilshere were inspiring Arsenal to their first victory of 2018, with a deal to bring Henrikh Mkhitaryan to the Emirates Stadium in exchange also nearing completion.

Wenger acknowledged “the future will tell if it was the right decision or not” to opt for a rarely seen swap deal, but recognised the prolonged speculation over Sánchez since his failed move to Manchester City last summer had created insecurity in his squad.

“Not the other players, just the team,” he said. “You work in a newspaper and there are periods when the atmosphere is less enjoyable than others. It is the lack of clarity. It is not losing players – teams are used to losing players. But it is fact that you have uncertainty in the group – that they don’t know if he will be here or not. Once it is clear the team gets used to it.”

Sánchez is believed to be signing a contract at Old Trafford worth as much as £14 million a year after tax, or £500,000 per week, having at first seemed poised to join City. Arsenal will not receive a fee, given the 29-year-old would have become a free agent in the summer, and Wenger was adamant he had done everything he could to convince him to stay.

“We did what we tried to do, and went as far as we could. Even Manchester City moved out of it in the end. That tells you we had no chance to give him a contract.”

Asked if he could understand why Sánchez had decided to leave, Wenger said: “I understand nothing. I cannot understand anybody wanting to leave Arsenal but in 30 years of doing transfers you learn a lot about human beings. As a professional it was perhaps his last contract at the top level and an important contract. After that I accept that because we accepted that we would let him go. After that, we analyse the pros and the cons.

Wenger was reluctant to discuss Arsenal’s move for Pierre Emerick Aubameyang, with Hans Joachim Watzke, the Borussia Dortmund chief executive, revealing over the weekend that he was still waiting for his Arsenal counterpart, Ivan Gazidis, to open formal negotiations, having “informed us that he intends to talk to us”, adding: “That, however, did not happen yet. There are no current talks.”

It is understood they would be willing to sell the Gabon striker for around £55 million, with Arsenal thought to be preparing a new bid that would exceed the club record fee paid to Lyon for Alexandre Lacazette in July.

“We are not as far as having to think about that. You create that problem at the moment,” Wenger said. “We have a strong squad that does not only depend on one player, that is for sure. Let’s not forget that if Alexis Sánchez goes, somebody else will come in who has quality as well. It is not that we are only losing a player, we are gaining a player as well. And we are still active in the transfer market and trying to bring players in.”

Goals from Nacho Monreal, Alex Iwobi, Laurent Koscielny and Lacazette inside the first 22 minutes on Saturday blew away an off-colour Crystal Palace side who struggled to contain their opponents. Özil, in particular, displayed some magnificent touches on his first appearance in almost three weeks as Arsenal turned on the style.

The Germany international is also out of contract at the end of the season, with United thought to be interested in signing him. Yet Wenger sounded hopeful that Özil could be persuaded to extend his stay in north London.

“He will be here until the end of the season, for sure,” the manager said. “Afterwards, if he will be here longer? I don’t know. It depends if we find an agreement or not.”