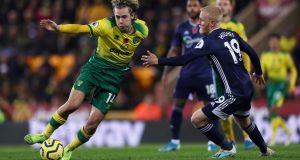 Tom Trybull of Norwich in action against Will Hughes of Watford during the Premier League match at Carrow Road. Photograph: Naomi Baker/Getty Images

Watford earned their first league win of the season at the 12th time of asking to clamber off the bottom of the Premier League and consign Norwich to take their place.

The moments in the match that counted were a goal in the second minute from Gerard Deulofeu and a crafty backheeled effort by Andre Gray seven minutes into the second half. Norwich dominated possession otherwise, had a number of chances and played for 25 minutes with a man extra after Christian Kabasele’s dismissal. But none of that mattered in the end and the Canaries have now taken just one point in seven games.

It was the resistible force against the movable object and, to make matters worse, either term could apply to both sides. It was a question of who would have their head in their hands first and Norwich obliged by giving away the opening goal within 90 seconds.

They have a philosophy and that involves passing out from the back, even when under pressure. Given their proclivity for surrendering the ball under duress, every team are pressing Norwich now and that included Watford.

In most of their recent matches they have put the emphasis on remaining compact but they were buzzing about the Norwich defenders and even Deulofeu was at it.

The Spaniard it was who stepped up to face Norwich’s Emi Buendía 25 yards from goal and with not many seconds on the clock. Confronted, the playmaker attempted to flick the ball behind himself and around his opponent. Bad move.

Deulofeu read the move, robbed possession, advanced at a pace barely above jogging and simply passed the ball beyond Tim Krul.

If anything, the shock was minimal and Norwich got something close to a grip and began to impose their passing game in a way they have struggled to do for much of the season. Key to their hopes was Onel Hernández; the German-Cuban winger was a threat down the left and causing Kabasele no end of problems.

If his end product had been better on any one of half a dozen occasions Norwich would have had an equaliser before half-time.

Watford had a chance to double their lead when Gray, on for the injured Roberto Pereyra, spun in the six-yard box and got a shot off, only to see it deflected wide by Ben Godfrey.

It was an entertaining first half with as many moments of good play as there were errors.

Norwich seemed to be still in the match too, but that calculation changed seven minutes after the restart when Watford doubled their lead. Deulofeu was the architect, selling Alex Tettey a dummy then – once his first cross had been blocked – digging out a ball to the penalty spot where Gray was waiting with his back to goal.

Jamal Lewis was marking him and, it seemed, tightly enough. It turned out to be too tight, however, as Gray chose not to take a touch but simply backheel the ball past the full back and beyond a nonplussed Krul.

It would be tempting to say that this was the sort of decisive action that comes from Premier League experience, except this exquisite goal was only the second Gray had managed all season.

The Hornets replaced Deulofeu with Adrian Mariappa and after a 10-minute period in which both Lewis and Kenny McLean drew saves from Ben Foster with long-range efforts, Norwich ran out of ideas, their lack of confidence clear. – Guardian