Vincent Kompany returns to guide Manchester City into fifth round 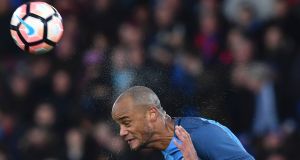 Manchester City eased into the fifth round of the FA Cup with a 3-0 win at Crystal Palace that showed why their hosts are at such risk of relegation.

City’s erratic Premier League form has given many the confidence to challenge them but they convincingly outplayed Palace at Selhurst Park, where fine goals from Raheem Sterling, Leroy Sane and Yaya Toure secured victory.

Defeat leaves Palace with only survival to concentrate on — perhaps exactly what they need in the circumstances — but came with the latest reminder of how desperately they need to improve.

Club captain Vincent Kompany returned to City’s starting XI, making his first appearance since suffering another injury in their 2-1 win at Palace at the same stadium in November.

There was also a full debut for new signing Gabriel Jesus and a rare start for Willy Caballero over out-of-form goalkeeper Claudio Bravo, but there was little question Kompany’s presence felt most significant.

Injuries have restricted the 30-year-old to only six appearances this season, and his natural authority in central defence would likely have corrected much of the uncertainty they have experienced there.

The gulf in quality between the two teams was first demonstrated in the 10th minute when Toure, from a deep position, curled a perfectly weighted chip into the penalty area which David Silva calmly struck first time before watching goalkeeper Wayne Hennessey smother wide.

Palace’s first response of note highlighted that further. From Andros Townsend’s 32nd-minute right-wing free-kick, Jordon Mutch headed onto Christian Benteke, and from in front of goal the unmarked striker headed harmlessly over.

It was a moment of exceptional quality that gave City the lead. From space in midfield in the 43rd minute, Jesus sent Sterling clear beyond Palace’s defence, from where the forward retained his composure to control and comfortably finish beyond Hennessey.

Allardyce responded at half-time by replacing the ineffective Benteke with Remy, but it was more than greater energy his team required.

Hail began to fall so heavily midway through the second half that had it continued conditions may have become unplayable. It instead passed, and the already comfortable visitors took advantage to double their lead.

The outstanding Silva strolled through midfield under little pressure in the 71st minute, but where others would have passed far earlier, he delayed until the final moment and played in Sane, who from a tight angle finished impressively beyond Hennessey and inside the far right post.

Toure returned from his exile from City’s first team to inspire their victory here in November, and two minutes into second-half stoppage time he added another superb goal.

From a 30-yard free-kick, he brilliantly curled into the top left corner and out of Hennessey’s reach. The cup may yet provide their likeliest route to success.

Meanwhile Vanarama National League side Lincoln pulled off another FA Cup shock as they knocked Sky Bet Championship leaders Brighton out in the fourth round with a 3-1 win at Sincil Bank.

Lincoln, who beat Ipswich after a replay in round three, had to come from behind after Richie Towell put the Championship side ahead on 24 minutes.

The Imps, currently top of the National League, were handed a way back into the tie on 57 minutes. Glenn Murray grappled with Robinson, and Alan Power converted the spot-kick past substitute goalkeeper Casper Ankergren, who replaced the injured Niki Maenpaa.

An own-goal from Seagulls defender Fikayo Tomori, who is on loan from Chelsea, put the non-league side in front on 62 minutes.

Robinson added a third on the break to secure Lincoln’s place in the FA Cup fifth round for only the second time since losing to Glasgow Rangers in 1886-87.

Championship high-flyers Newcastle were left to concentrate on their promotion bid after losing 3-0 at League One Oxford.

Kane Hemmings fired the U’s in front two minutes into the second half.

Aleksandar Mitrovic had the chance to level from a penalty on 67 minutes, but the Serbian’s spot-kick was saved by Simon Eastwood.

With nine minutes left, Curtis Nelson headed home from a corner and Antonio Martinez nodded in a late third.

Middlesbrough saw off League Two Accrington Stanley at the Riverside Stadium with a 25-yard effort from Stewart Downing in the second half.

German forward Collin Quaner, signed from Union Berlin, scored on his debut before a penalty from Isaiah Brown and a late double for Michael Hefele secured the Terriers’ place in the last 16.

Blackburn beat Blackpool 2-0, as the visitors finished with 10 men at Ewood Park.

Sam Gallagher put Rovers ahead on nine minutes, with winger Elliott Bennett doubling the lead in the 22nd minute before Blackpool midfielder Kelvin Mellor collected a second caution midway through the second half.