Valdés: ‘If I was born again I wouldn’t be a football goalkeeper’ 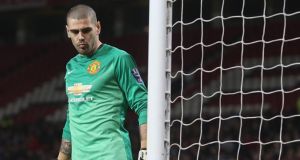 Víctor Valdés, who is currently out of favour at Manchester United following an argument with manager Louis van Gaal, has admitted he is difficult to live and work with. Photograph: Getty

Víctor Valdés, currently in the middle of a war of words with his Manchester United manager, Louis van Gaal, has admitted he is a “very difficult person to work and live with”.

Valdés was left out of Manchester United’s summer tour to the United States because, according to Van Gaal, he showed a lack of commitment by refusing to play with the reserves and when the Dutchman was asked if the Spanish goalkeeper would be sold, he replied: “Yes.”

Valdés hit back with a thinly veiled dig at Van Gaal on Twitter, posting a montage of photos that showed a number of reserve-team matches he had played in.

But speaking on 15 June, before the falling out came to light, the goalkeeper admitted his personality is not the easiest to manage and chose to praise his Pep Guardiola for his man-management during their time together at Barcelona.

“I am a very difficult person to work and live with. My wife deserves the biggest of trophies,” he told Colombian news station RCN in an interview aired last week. “I was very lucky to have so many seasons with [GUARDIOLA]. In addition to being a teacher to many of us, he was always able to communicate greatly with everyone and knowing how to adapt to talk to different people in the dressing room.

“That’s the most challenging thing for a coach, to adapt their own pride to be able to speak to everyone with their different egos.”

Valdés’ impending exit from Old Trafford will not be the first time he has left a club under a cloud with the goalkeeper also conceding that the circumstances of his departure from Barcelona at the end of the 2013-14 campaign, at which time he was nursing a knee injury and without a club for the following season, were far from ideal.

“I recriminate myself when I keep myself in the margins and let people down, especially those who expect better from me,” added Valdés. “The day when I left Barça, because of the treatment I was receiving and my character, it didn’t go as I would have wished. I drifted and then just left, I’m sure people expected much more from me.”

Valdés won six La Liga titles and three Champions League winners’ medals during his time at Barcelona but he also made a candid admission should he have his time again.

“If I was born again, I wouldn’t be a football goalkeeper,” said Valdés. “They convinced me I had a lot of talent but it’s not an easy path and it hasn’t made up for all the years of suffering. There have been many days when I haven’t wanted to be there, but I do it since I was convinced when I was young.

“I have walked the path with discipline but it has brought me thousands of moments of suffering.”