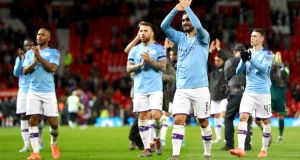 Manchester City will take a 3-1 lead into the second leg of the Carabao Cup semi-final on Wednesday. Photo: Michael Steele/Getty Images

Ole Gunnar Solskjær has admitted Manchester United require a “perfect performance” to knock Manchester City out of the Carabao Cup and reach the final.

United have to overturn a 3-1 deficit in Wednesday’s semi-final second leg against the holders at the Etihad Stadium.

Solskjær said: “It has to be a perfect performance to win with two goals against such a good team away from home.”

Away goals are not a factor and if the aggregate score is tied after 90 minutes, the game will go to penalties.

“We have got to go into the memory bank and think about PSG, and the game in December gives us hope [too],” he said. “We hit them [City] last time when they were struggling a bit and since then they’ve played really well.

“We’ve lost Scott [McTominay] and Marcus [Rashford] since that game, we are a little bit lighter in the playing department, but we can’t just defend. We have to keep the ball and make them run after the ball – but we’ve done amazing things before at this club.”

Jürgen Klopp has said that he will select Liverpool’s youth players in their fourth-round FA Cup replay with Shrewsbury Town because it is to be staged in the upcoming winter break.

Asked about this Solskjær referred to how United did not defend the Cup as holders in 2000 because Alex Ferguson chose to field his team in the Fifa Club World Championship.

“We all regret maybe not going for it in 2000 when we went to Brazil,” he said. “[but] it’s supposed to be a break and if it’s going to help the clubs they need a break – it’s up to Jurgen and Liverpool to make decisions.”

Solskjær offered no update on United’s interest in Sporting Lisbon’s Bruno Fernandes and suggested Alexis Sánchez would be given another chance to prove himself after this season’s loan at Internazonale. “He will come back and prove you all wrong,” said Solskjær. – Guardian

Croke Park back open for business as Dublin gain Laois revenge 21:37
Hugo Keenan and Will Connors: The best of friends, the best of debuts 21:09
Ireland women’s shake off the rust to beat Italy 21:09
Man United and Chelsea play out drab draw in the driving rain 19:54
Antrim too good for Waterford in league clash in Dundalk 19:09