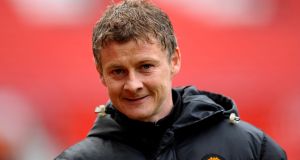 Ole Gunnar Solskjaer: “Manchester United is in my heart and it’s brilliant to be coming back in this role.” Photograph: Jason Cairnduff/Reuters

Manchester United will hope Ole Gunnar Solskjær can help convince David de Gea, Anthony Martial and Paul Pogba that their long-term futures are with the club after each became disillusioned under José Mourinho.

Solskjær was on Wednesday confirmed as caretaker manager until the end of the season, with a brief to restore the team’s traditional attacking play and try to bridge the 11-point gap to the final Champions League berth. Yet United also believe the change could have longer-term benefits.

De Gea, Martial and Pogba are viewed as key to the progression of the side. De Gea, 28, and Martial, 23, were so reluctant to agree fresh deals under Mourinho that United were forced to trigger the extension clauses in their contracts to tie them to club until summer 2020. Pogba’s relationship with Mourinho soured, and the 25-year-old France midfielder had been dropped for three of the past four games, causing the midfielder to consider his options.

There is an appreciation within the hierarchy that the value of De Gea and Martial, which would be around £130 million combined if they sign new terms, will sizably decline once they enter their final years. The hope is Solskjær can help convince each to sign for the long term and that Pogba can again be content at United thanks to the Norwegian’s man-management approach.

Solskjær’s lighter touch and an adherence to attacking play are the opening moves in the club’s attempt to restore their core values, paving the way for whoever takes over as the permanent manager in the summer.

The unhappiness of De Gea, Martial and Pogba under Mourinho was reflected by close to all of the squad, the Guardian understands, with Nemanja Matic one of the few exceptions. As such, Solskjær’s appointment has been met with relief after the weariness felt at Mourinho’s often sombre moods and the tense environment he created.

Until I get back to football I feel I have to right to live my normal life.

“It’s over, that’s me and that’s how I’ve always been. I was always very critical of managers that leave clubs and then they come out and they speak about the details of what happened, who is to blame. That’s not me. Until I get back to football I feel I have to right to live my normal life.”

He also issued a statement, saying he was “immensely proud” to manage the club. “I believe all United supporters recognise this,” he said. “Just as was the case with my previous clubs, I have worked with some wonderful people and I believe that some will be my friends for life.”

Solskjær, who will be assisted by one of Alex Ferguson’s former number twos, Mike Phelan, is expected to take his first training session on Thursday before an opening media conference on Friday. United play at Cardiff City on Saturday, where Solskjær had an unsuccessful spell as manager in 2014.

The former United striker will return to his job as Molde manager in May, with the Norwegian club appointing a temporary manager of their own, Erling Moe, to oversee the start of the season in late March.

“Manchester United is in my heart and it’s brilliant to be coming back in this role,” Solskjær told United’s website. “I’m really looking forward to working with the very talented squad we have, the staff and everyone at the club.”

1 Tipping Point: Eddie Jones’s rhetoric is out of place in a febrile political climate
2 Maguire and Martial head Manchester United past Chelsea
3 Eddie Jones continues to revel in putting rugby’s nose out of joint
4 Rory McIlroy heads for Mexico with ‘WGC slam’ in sight
5 Andy Farrell recalls 13 players to Ireland squad ahead of England clash
Real news has value SUBSCRIBE