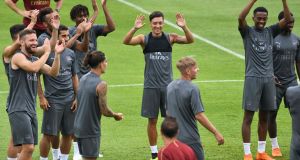 Arsenal boss Unai Emery is keen to offer Mesut Ozil a semblance of “normality” following the midfielder’s controversial decision to retire from international duty with Germany this week.

Ozil, 29, called time on his nine-year career with Die Mannschaft after accusing the German Football Association (DFB) of treating him with “racism and disrespect” over the issue of a photograph featuring the player alongside Turkish president Recep Tayyip Erdogan which was taken before the World Cup.

The DFB has “emphatically rejected” Ozil’s claims of racist treatment and while Gunners manager Emery did not take sides, he offered his support to the German as a member of his squad on a pre-season tour of Singapore.

Speaking at a press conference ahead of Thursday’s friendly against Atletico Madrid, with Paris St Germain also providing opposition later on the trip, Emery told arsenal.com: “All of us want to help Mesut feel like it is his home here with us, like a family and it is a family for every player.

“He feels here with us that he can work every day, and it is good for us that he decided to come here and work with us before our two matches.”

Emery says he has not yet spoken to Ozil about his decision, which was explained across several lengthy statements on Twitter.

“He arrived on Sunday to travel and I prefer to give him the normality in the team and for him to feel good with us,” said the Spanish coach, who is backing Ozil to respond brightly to any negative fallout.

“He has experience, he has quality and he has a great mentality and we are going to help him feel good and to show his quality with us. I am sure he is going to have a big season with us.

“I am very happy with him, every player is looking together and Mesut has the respect of every player here. It is a personal decision from Mesut and I respect it.”

Goalkeeper Petr Cech, who insists he is “concentrating on this season” amid speculation about his long-term future at the Emirates Stadium, is also keen to support Ozil as a colleague and to avoid assuming a position in his argument with the DFB.

The 36-year-old Czech said: “I’m not in a position to really comment on that, it’s a private personal matter for Mesut against the German Federation.

“As a team we support him here, we try to make sure he feels good, so he can train and perform at his best. As a team that’s all we can do.

“He’s training really well, he’s happy to be with us and we’re happy to have him back as well because he is one of the key players in our team and we need him to be fit and ready for the season.

“He has been working really hard so hopefully he will be fit.”