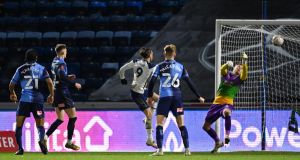 José Mourinho had warned Gareth Bale he would have to fight for his place in this Tottenham team. But even if he is still showing signs of rustiness four months into his second spell at the club as he spurned several chances, it was the Welshman’s equaliser that ensured Spurs avoided the embarrassment of being eliminated by the team currently propping up the Championship.

Trailing to Fred Onyedinma’s excellent strike for Gareth Ainsworth’s battling side, Bale had already passed up three good opportunities when he eventually found the net on the stroke of half-time before late goals from Harry Winks and substitute Tanguy Ndombele finally set up a tie with Everton in the fifth round.

With half an eye on Liverpool’s visit to north London on Thursday in the Premier League, Mourinho made 10 changes from the side that defeated Sheffield United in their last match as Harry Kane and Son Heung-min were among the A-listers named as substitutes. But there was no place on the bench for Dele Alli, whose future at Spurs remains in doubt amid strong interest from Paris Saint-Germain in reuniting him with Mauricio Pochettino.

Ainsworth admitted he had shown his players highlights of the first-ever meeting of these two clubs in 2017 at the same stage of this competition, when it took late goals from Alli and Son to rescue Tottenham from an embarrassing exit at White Hart Lane to opponents who were then in League Two. Wycombe have since made it to the second tier for the first time in their 134-year history, having been promoted to the Football League in 1993 under Martin O’Neill.

Yet while Ainsworth’s side find themselves bottom of the Championship and 10 points from a safe position, their manager had warned they have improved significantly in the past four years and were hungry to match the club’s famous run to the semi-finals under Lawrie Sanchez 20 years ago. Having sailed past Marine in the previous round, Tottenham began this game in confident manner and should have gone ahead in the fourth minute when Bale somehow nodded wide from Lucas Moura’s corner.

Admiral Muskwe – a Zimbabwe international on loan from Leicester – was handed his first start for Wycombe after featuring as a substitute in the win over Preston in the last round and forced Joe Hart into a save soon after to illustrate the threat posed by the hosts. But another effort from Bale that fizzed off target was an indication that he is not quite the player who earned a world record move to Real Madrid.

The importance of those missed early chances was underlined when Wycombe went ahead after a well worked routine from a throw-in. Uche Ikpeazu showed immense strength to hold off the challenge of Toby Alderweireld and Hart was left with no chance against the mysteriously unmarked Onyedinma.

Another missed opportunity from Bale within minutes of the goal left Mourinho looking less than happy on the touchline. When first Moussa Sissoko and then Japhet Tanganga struck the crossbar, he could have been forgiven for thinking it wasn’t Tottenham’s night.

But with the deftest of touches from Moura’s cross that diverted it past Ryan Allsop, Bale finally got on the scoresheet just before half-time to settle his manager’s nerves slightly.

Despite the sub-zero temperatures in Buckinghamshire, Pierre-Emile Højbjerg was sent out early to warm up at half-time without his tracksuit and he was introduced for Tanganga, with Sissoko switched to right-back. Moura and Bale both spurned chances to give Spurs the advantage at the start of the second half before Allsop did well to parry Érik Lamela’s deflected strike.

Mourinho decided it was time to call for the cavalry in the form of Kane, Son and Ndombele, while Ainsworth turned to his own talisman Adebayo Akinfenwa just after Allsop had denied Kane.

Son came within inches of finding the breakthrough as Tottenham threw everything at Wycombe in an attempt to avoid extra time. The South Korean uncharacteristically rushed his next effort and watched in horror as the ball sailed harmlessly over the crossbar. Luckily for him, Winks was much more assured when the next chance fell his way after Allsop had again denied Kane.

The England midfielder curled a sumptuous shot with his left foot from outside the area before Ndombele scored twice in the dying minutes to give the final scoreline a rather flattering look for Mourinho’s side. - Guardian