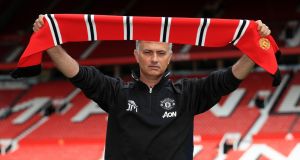 Manchester United have announced that manager Jose Mourinho has ended his two-and-a-half year spell at the club.

Here, we look at a timeline of the ups and downs of 55-year-old’s tenure at Old Trafford.

October 23, 2016 — A 4-0 thrashing at the hands of former club Chelsea on his return to Stamford Bridge.

October 29, 2016 — Sent to the stands at half-time for protesting a decision against his side in a 0-0 home draw against Burnley.

February 26, 2017 — Ibrahimovic scores twice as the Red Devils beat Southampton 3-2 to lift the EFL Cup — Mourinho becomes the first United manager to win silverware in his debut season at the club.

October 21, 2017 — A 13-match unbeaten run across all competitions to start the season ends with a 2-1 loss at newly-promoted Huddersfield.

March 13, 2018 — Sevilla knock United out of the Champions League at the round of 16 stage, winning 2-1 at Old Trafford after a goalless first leg in Spain.

April 7, 2018 — Paul Pogba scores twice and Chris Smalling gets the winner as United come from two goals behind to win 3-2 at Manchester City and prevent Guardiola’s side securing the Premier League title in the derby.

May 12, 2018 — Rui Faria announces he will quit as Mourinho’s assistant at the end of the season, the pair having worked together at various clubs since 2002.

August 27, 2018 — Defeat at Brighton in the second game of the season is followed up by a 3-0 loss at home to Tottenham — the worst home defeat of Mourinho’s career.

September 29, 2018 — A five-match unbeaten run in all competitions was abruptly ended with a 3-1 defeat to West Ham at the London Stadium.

November 11, 2018 — Three straight wins, including an incredible 2-1 comeback victory at Juventus, looked to put Mourinho’s side back in form but they fell to a 3-1 derby defeat at Manchester City to pile the pressure back on the Portugese manager.

December 16, 2018 — A last-gasp 1-0 win at home to Young Boys saw United qualify for the Champions League knockout stages gave Mourinho a stay of execution, but a final matchday loss at Valencia was followed by a heavy 3-1 reverse to Liverpool at Anfield cranked up the pressure.

December 18, 2018 — Just two days after their first defeat in nine league matches against their north-west rivals, Manchester United announced the Portuguese was sacked by the club on Tuesday morning.