Nemanja Matic is set to depart, but he is unlikely to be joining Manchester United 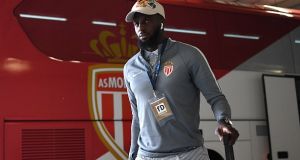 Tiemoue Bakayoko is set to join Chelsea from AS Monaco. Photograph: Getty Images

Tiémoué Bakayoko will undertake a full medical at Chelsea on Friday after the payment structure on a deal worth up to €45m (£39.7m) was agreed with Monaco to secure the France midfielder.

The 22-year-old underwent keyhole surgery to clean out one of his knees at the end of the French domestic season and is in rehabilitation. Chelsea are confident Bakayoko will not require a further operation but, while the player is able to conduct the medical and complete his transfer, the medical department consider him to be at least six weeks from being in contention to feature for the first team.

They will scrutinise the knee more fully during the tests but do not expect to find any long-term complications. Yet Bakayoko will be well behind his club-mates in terms of preparation for the new season, meaning he is unlikely to play for Antonio Conte’s team before the first international break, potentially missing the Community Shield fixture against Arsenal and the top-flight games against Burnley, Tottenham Hotspur and Everton.

The French title winner had made it clear from an early stage that his preference was to move to Chelsea and Monaco received no other firm bids. However, negotiations over the structure of the deal, combined with Bakayoko’s knee problem, have delayed the move. Chelsea hope to confirm the deal before the squad depart on Monday for a three-game tour of east Asia. Although the Frenchman will not be able to play, he is expected to travel and continue his rehabilitation in China and Singapore.

His arrival may prompt the departure of the unsettled Nemanja Matic, although Chelsea will resist selling the Serb to Manchester United. Talks with Matic over a new contract have failed to reach a resolution, with the Premier League champions prepared to cash in on the 28-year-old, who would be available for a similar fee to that paid for Bakayoko. Internazionale have been credited with an interest and Chelsea would be happiest selling Matic abroad.

Talks continue with Juventus over Alex Sandro and with Real Madrid over Álvaro Morata and the Brazil right-back Danilo. Conte has welcomed Willy Caballero and Antonio Rüdiger to the ranks, although the latter has been granted time off this week after his participation in the Confederations Cup with Germany.