Suárez should remember support of club and fans - Rodgers 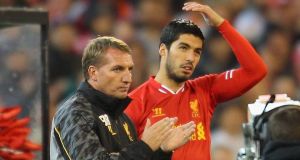 The future of Luis Suárez as a Liverpool player was no clearer after Wednesday’s friendly against Melbourne Victory at the MCG, with Brendan Rodgers saying he had not spoken to the club about Arsenal’s £40m plus £1 bid for the Uruguayan.

“He’s been surrounded by speculation,” the Liverpool manager said, “but he’s very much a Liverpool player and over the course of the next number of weeks we’ve got to get him up to speed and have him fit and raring to go for the beginning of the season.”

Asked if Liverpool expected loyalty from Suárez after the support shown to him through the Patrice Evra affair as well as the 10-match ban for biting Chelsea’s Branislav Ivanovic, Rodgers said he expected that show of faith to be on Suárez’s mind.

“There’s no doubt the market nowadays is very small and Luis will always be linked with top clubs but I think the support he’s received from the supporters and the people of the city of Liverpool has been unrivalled,” said Rodgers.

“In the period of time he’s missed a lot of games for various reasons and the people have stood by him like a son and really looked after him, so I’m sure that whatever happens in the coming weeks that will be on his mind because it’s certainly something you can never forget.”

Though his team struggled at times, Rodgers was happy with Liverpool’s 2-0 win over Victory, saying they were tactically sound and showed “lots of moments of quality” during the game, in which Steven Gerrard and Iago Aspas scored.

Suárez came off the bench in the 72nd minute to assist the second on the stroke of full-time.

Rodgers also praised Melbourne Victory and their coach, Ange Postecoglou, saying they had a similar footballing ethos. “They can be very proud of what they put on tonight. You’ll Never Walk Alone at the beginning was a real tear-jerker. There’s not many clubs in the world can do what we’ve done in the last week or so. Over 80,000 in Jakarta, over 90,000 here.

“It’s a day that hopefully many of the supporters over here in Australia will never forget.”