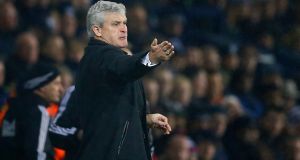 Stoke manager Mark Hughes claimed plenty of trophies as a player but is eager to hunt down some silverware from the dugout — something he feels British managers are not getting enough opportunities to do.

Hughes’ side head into Tuesday’s Capital One Cup semi-final first leg home clash against Liverpool with the former Manchester United and Chelsea forward and Manchester City boss still yet to win a competition during his management career.

And he said: “I remember those emotions, the excitement and pride you get from winning things, and I’d love to be able to do it as a manager.

“I got to a League Cup semi-final at City but got sacked before we played it, although that’s another story.

“I haven’t been able to make that next step and I would love to get some silverware.

“I had a fantastic playing career and that was the norm for me — that was what my expectation was.

“As a manager, it’s more difficult. There’s a debate around British managers and the opportunities they have.

“If you look over the years, the top jobs in this country haven’t really become available. At Man United, Sir Alex (Ferguson) was there for a long time, Arsene Wenger’s still in situ (at Arsenal), Chelsea don’t appoint British managers and Man City was an opportunity which unfortunately was taken away from me.

“A lot of foreign managers are able to build their CVs domestically, so when people look, they can see they’ve won cups and leagues — for British managers, that is a bit more difficult.”

The Welshman is also keen for his players to enter Stoke folklore the way their predecessors did when they won the League Cup — the only major trophy in the club’s history — in 1971-72, the last season they made the semi-finals.

He said: “This club has a group of ex-players who are rightly lauded because of what they did and we’d love to be another group viewed in the same light.”

The Potters have already made notable progress since Hughes took charge in 2013, achieving their best-ever Barclays Premier League finish of ninth a year later before matching it the season after.

They are currently 10th, and on the prospect of European football, Hughes said: “We want to keep progressing and Europe is another thing we want to be part of.

“We may be able to do that through our league position or it may have to be through cup competitions, but we would take it however it comes.”

Like Jurgen Klopp’s eighth-placed Liverpool, Stoke go into Tuesday’s encounter on the back of a weekend defeat, but it was only the fourth reverse in the Potters’ last 15 top-flight games, eight of which they have won.

They have emerged triumphant from five of their last six home matches in all competitions — including victories against Chelsea, Manchester City and Manchester United — and although they lost 1-0 at home to Liverpool earlier this season, they finished the last by winning that fixture 6-1.

And Hughes said: “If everything goes for us we could take the tie away from Liverpool in this first instance. We certainly have the potential.

“Given the different financial outlays of the clubs, perhaps the difference between the two teams isn’t as marked as it should be.”

Hughes will have Geoff Cameron available on Tuesday, Stoke having been successful with their appeal against the red card the midfielder received in Saturday’s loss at West Brom.