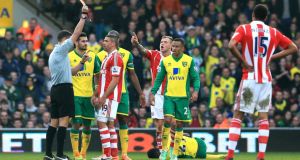 The centre back scored in either half to give the Bluebirds’ battle against relegation a boost while increasing the woes of their bottom-of-the-table opponents.

Cardiff manager Ole Gunnar Solksjaer had said in the build-up the match was one they must win and in doing so he registered only his second league victory in nine matches since taking the job in January.

Caulker put them ahead on the stroke of half-time when he converted Craig Noone’s deflected cross but early in the second half Giorgios Karagounis’s corner was flicked on by John Heitinga for Lewis Holtby to convert his first goal since joining on loan from Spurs in January.

They were level for eight minutes before Caulker headed Cardiff back in front and when goalkeeper Maarten Stekelenburg’s saved Jordon Mutch’s header only for the rebound to go in off his own defender Sascha Riether.

Victory put them within a point of safety with West Brom, who lost 3-0 at home to Manchester United, the team immediately in their sights.

Norwich edged four points clear of the relegation zone with a 1-1 draw at home to Stoke, who had goalscorer Jon Walters sent off five minutes after scoring the equaliser.

Bradley Johnson’s header from Robert Snodgrass’s 56th-minute free-kick put the hosts ahead only for Sebastien Bassong to foul John Guidetti to allow Walters to score from the spot in successive weeks.

However, the goalscorer was sent off for clattering into Alex Tettey as the Potters saw out the final 13 minutes with 10 men.

Southampton consolidated their position in ninth place as Jay Rodriguez’s breakaway in the 37th minute provided the only goal against Crystal Palace, who themselves are only two points above the bottom three.