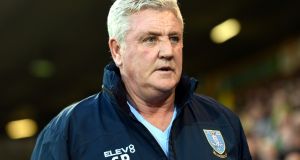 Steve Bruce is poised to be appointed as Newcastle United’s manager after asking permission from Sheffield Wednesday to talk to the club.

With meetings scheduled to take place in the next 24 hours, it is thought Bruce could be confirmed as Rafa Benítez’s successor as early as the weekend, with compensation for Wednesday the only likely sticking point.

Wednesday’s chairman, Dejphon Chansiri, is prepared to put up a fight to keep his manager; although, given Bruce’s evident desire to speak to Newcastle, a more realistic battle may concern the amount of money the Championship club receives. Bruce has been at Wednesday only since January and is on a one-year rolling contract.

Newcastle initially felt a payment of around £1 million would be enough to secure his release, though sources close to Wednesday believe the club feels entitled to ask for more, with some suggestions the full compensation package will be closer to £5 million. That might be too much for Mike Ashley, who wanted a reliable replacement for Benítez and believed Bruce might be obtained quite cheaply. And, as the 58-year-old is already unpopular with Newcastle fans because of his time as Sunderland manager, it might appear the club are paying over the odds for a less-than-ideal candidate.

Yet with less than a month of the transfer window remaining, and Newcastle in China on a pre-season tour next week, the club are in need of a manager before they can start signing players, and preferably one with Premier League experience. Bruce, a Geordie by birth and a boyhood Newcastle supporter, has plenty of that, and though conditions at St James’ Park under Ashley are presently so unappealing that Sam Allardyce has said he turned down the chance to return, it appears the former Sunderland, Wigan and Aston Villa manager is less capable of resisting the Tyneside challenge. Allardyce told TalkSport: “I was very flattered that I was considered but it’s that thing – ‘don’t go back’.”

Wednesday are entitled to feel disappointed if Bruce goes. Even though they had relegation concerns at the beginning of the year, they allowed Bruce to take a planned month off following a couple of medical issues and the death of his parents, and they must have been hoping the manager could continue to build on the good work of his first half-season at Hillsborough. After an unpromising start, Wednesday finished a respectable 12th, but if Bruce turns up at Newcastle he will go straight into another battle with relegation.

Newcastle spent most of last season in the bottom third of the Premier League, eventually saved by Benítez’s organisational ability and goals from Ayoze Pérez and Salomón Rondón, though all three have left along with the out-of-contract midfielder Mo Diamé. No players have been signed, and Newcastle are on the verge of parting with the midfield prospect Sean Longstaff to Manchester United.

Whoever takes over can expect to find himself in China as early as next week and will have to supervise a chaotic pre-season before the actual football even starts.