In the last calendar year only Liverpool, City and United have won more Premier League games 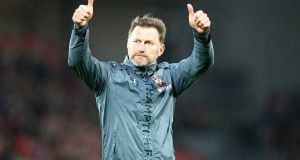 It was an accidental masterpiece of theatre that made for one of the most absorbing jousts this season. Even in the seconds before Danny Ings had latched on to James Ward-Prowse’s cunning free-kick, the box-office sideshow to Southampton’s victory over Liverpool was well under way. Jürgen Klopp raged as Ralph Hasenhüttl flip-flopped from apoplectic to equable, willing his players on with the gusto of a marathon spectator, before the Southampton manager crashed to all fours wiping away tears of joy.

That goal in itself is a microcosm of the strides Southampton have made under Hasenhüttl, a workaholic who spent last spring creating a digital “playbook”, a blueprint for players and staff to follow across the club.

This season no team in the division have scored more goals from setpieces, excluding penalties, and seven of their past nine goals have stemmed from set plays. The nine Southampton have managed means they are two away from equalling last season’s tally with more than half a season to play.

The hours Ward-Prowse spends honing his craft by practising a dozen free kicks every week should not be overlooked, but nor should Hasenhüttl’s decision to narrow the brief of the former goalkeeper coach Dave Watson. Upon taking charge, Hasenhüttl was unhappy Watson had to juggle roles, and so for the past 18 months his focus has shifted to setpieces.

“It is a luxury, if you want, but it gives you a lot of quality in offence but also in defence, at setpieces,” says Hasenhuttl. “It was not possible for Dave to do like he did before, goalkeeper coach and setpieces coach. I decided to let him only do the work for setpieces because it is a massive challenge every week, especially now with so many games to prepare for.

“He is very good, very concentrated, and the way he teaches it on the pitch is very good, enthusiastic, and this is the reason why we have scored a lot of goals so far and also still, touch wood, very good defending at setpieces.”

Hasenhüttl’s high-octane style is engrained in his squad. Ibrahima Diallo, an £11 million recruit from Brest who made his first start on St Stephen’s Day, was exceptional against Liverpool, and Kyle Walker-Peters has been a standout performer since joining permanently from Tottenham.

In the last calendar year only Liverpool, Manchester City and Manchester United won more Premier League games. This season a team that spent much of the last campaign hovering above the relegation zone are seventh, 17 points above the dotted line.

After ditching the self-destructive high line that allowed Son Heung-min to feast on the grassland behind the Southampton defence at St Mary’s in September, they have proven stubborn opposition, keeping a joint-high eight league clean sheets.

“It clearly didn’t work, especially not with the new offside rule where you must always let [play] run,” Hasenhüttl says. “We were on the wrong path in the summer. We tried it and we felt it didn’t fit, so we changed it again.

“You have to be open-minded all the time, and self-critical. If you think you are on the wrong path, give it away and take something new. This is what we did, and I think from that moment on we haven’t conceded many goals so far.”

Saturday brings a trip to fourth-placed and free-scoring Leicester. Southampton are likely to be without Danny Ings after the striker tested positive for Covid-19 and, although a modest squad will be stretched, his absence provides further opportunity.

In many ways it will be the perfect test for a club happy to lean on youth. Nathan Redmond, Moussa Djenepo and Nathan Tella are injured, but the 21-year-old Daniel N’Lundulu impressed off the bench against Liverpool, when the 18-year-old midfielder Kgagelo Chauke became the latest youngster included in the matchday party.

Shane Long, who recently compared the belief in the squad to the Ronald Koeman era, when Southampton twice qualified for Europe, is a sound alternative.

One of the academy’s main objectives is for half of the first-team matchday squad to be made up of players with roots at the club. Against Liverpool there were 11 academy graduates, including Theo Walcott, who has looked comfortable up front or wide since returning to where it all started, and Jack Stephens, who joined from Plymouth aged 17.

In September Southampton’s under-23s morphed into a ‘B’ team, a decision led by Hasenhüttl and the director of football, Matt Crocker, to align youngsters closer to the first team so that when an opportunity arises they are versed in the Austrian’s thinking.

Not since Mauricio Pochettino have supporters been so smitten with a manager. The club sense they are on to a good thing. Hasenhüttl has an aura, a welcome gravitas, but most striking is the marked improvement across his team, from Alex McCarthy in goal to the fit-again Che Adams, who has formed a wonderful tag team with Ings in attack. When they press they trigger the rest of the machine.

“We are famous for our pressing, I think, because it is always nasty to play [against] but we have added more calm and composure in every situation,” Hasenhüttl says. “I can guarantee we are turning every stone, every week to find solutions.”