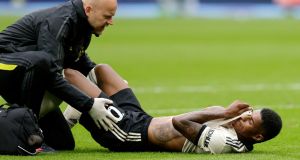 It was a soundbite from Ole Gunnar Solskjær designed to cut through the hysteria that always accompanies a bad Manchester United defeat and, make no mistake, Sunday’s 2-0 reverse at West Ham was as bad as anything on the manager’s nine-month watch – with the exception of the 4-0 drubbing at Everton last April.

“I’ve said it many times, this is a rebuilding job and the boys are working as hard as they can,” Solskjær said.

There is a fundamental problem with this public admission. It is generally accepted that if you offer a footballer an excuse, they will take it and the notion of a club being in transition fits the description.

Rebuilding or transition suggests that things will improve gradually, eventually, at some unspecified point in the future. But as for the here and now, there can be bumps along the road – which is the phrase that Solskjær used after West Ham. They must be tolerated, accepted. And, by that measure, it is no great leap to see the situation as working to lessen competitive edges, to allow for drift.

It is not a direct analogy but remember what happened when Alex Ferguson announced at the beginning of the 2001-02 season that he would step down as the United manager at the end of the campaign? In Ferguson’s own words, a lot of the players “put their tools away”. He would change his mind midway though the season and stay.

United are drifting and Solskjær’s honeymoon period, which peaked with the 3-1 Champions League win at Paris Saint-Germain last March, a night of miracles when anything seemed possible, has come to feel like a long time ago. When United triumphed that night, Solskjær’s record in all competitions read: W14 D2 L1. And the defeat was in the first leg against PSG.

Since then, it has been five wins, four draws and 10 defeats in all competitions while in the Premier League it is W4 D4 L7 – or 16 points from 15 games. Transpose that across a 38-game season and it makes 40½ points. It is practically relegation form.

Thousands of Twitter users laughed at the clip from the West Ham game that went viral. It appeared to show the defender Phil Jones, who was in the stands having been excluded from the squad, murmuring along with a chorus from the West Ham fans about Solskjær being “sacked in the morning”. The executive vice-chairman, Ed Woodward, turns around and seems to mouth: “We’re on camera. Stop.”

The true context is difficult to know but it did not look good and chimed with the overall impression of disarray, which had been pronounced when Marcus Rashford had to go off with a groin strain and Solskjær looked at his options on the bench. Anthony Martial was missing with a thigh problem while the 17-year-old Mason Greenwood had not travelled because of tonsillitis. There was nothing else to do but send on the attacking midfielder Jesse Lingard and ask him to play as a false nine.

It was easy to link Rashford’s injury to his game time for the club this season. The striker had sat out only five minutes in all competitions and he was pressed through all 90 of the Europa League tie against Astana at Old Trafford last Thursday.

It has not taken an injury crisis to show up United’s lack of high-grade options. With only Paul Pogba missing in midfield, Solskjær started with Nemanja Matic, Scott McTominay and Juan Mata. Would any of the trio get into West Ham’s first-choice line-up ahead of Declan Rice, Mark Noble and Manuel Lanzini?

Recruitment has been a major shortcoming at United for a number of years and the positive reading of Solskjær’s rebuilding comment is that he is only telling the truth. The summer was the first opportunity for him to begin to put his mark on the squad, given the vagaries of the January window, and the additions of Harry Maguire, Aaron Wan-Bissaka and Daniel James represented steps in the right direction.

Consider the outgoing business. United sold Marouane Fellaini in January and, over the summer, they moved on Antonio Valencia, Chris Smalling, Matteo Darmian, Ander Herrera, Alexis Sanchez and Romelu Lukaku. It was hard to argue with the reasons for parting with each one yet it added up to a clearout and, in some positions, left Solskjær slightly short in terms of bodies.

The renewal process has further ground to cover, with more unwanted players to shift and fresh quality needed. It will take time, at least another summer or two, and the difficulties of making top-class signings while United are a Europa League-level club ought not to be underestimated.

United have eight points from their opening six league matches, which is the same number as Tottenham and Chelsea, but the sense of angst at Old Trafford feels more acute; the spotlight on Solskjær more unforgiving. Perhaps it is because of the credit that Mauricio Pochettino has built at Spurs and the fact that Frank Lampard has just started his managerial project at Chelsea.

Some fans have started to question whether Solskjær is the right man to oversee the United rebuild. The dangers and realities he faces are plain. – Guardian