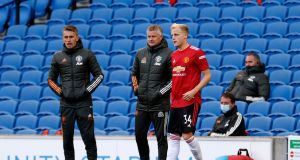 Ole Gunnar Solskjær has performed a U-turn on his stance that Manchester United needed to add depth to compete by suggesting his squad would be strong enough should there not be any further strengthening.

The manager has so far added Donny van de Beek in a £35m transfer from Ajax. Negotiations are continuing for Porto’s Alex Telles, Borussia Dortmund’s Jadon Sancho remains a target and Barcelona’s Ousmane Dembélé is a potential option on loan.

With the market closing for such transfers on Monday, time is against United, yet the manager shrugged off concerns and clarified his claim in April that United could “exploit” the pandemic’s impact on the market.

Solskjær said: “I think my wording in lockdown – exploit – was a bad word by me. I didn’t mean in that respect. I meant clubs out there [MAY]have to move players because of the situation and it might be an interesting situation for us. At the moment there’s not been those situations. We’ve lost loads of money as the other clubs have.”

After the Europa League semi-final loss to Sevilla in mid-August Solskjær said United needed “to strengthen the depth because it’s going to be a long season” and the club had to be “good, smart and clever”.

Reflecting on Friday on those comments he said: “When I talked about the squad depth, of course the performances from [the then first-choice] players didn’t warrant me giving [other players] more options: the 11, 12, 13, players deserved to play as they played really well. I think it’s a different scenario now – after two games already I’ve seen many of the players who didn’t play too much last season performing really well.”

Pressed about the impending deadline, he added: “There are many ways to improve the team. We’re working here to get better. I keep reading about players that should be playing instead of ones that are playing: that tells me I’ve got a strong squad. We need to get fit and keep injury-free but there is more competition for places now.”

Reminded of his comment, also after the Sevilla game, that the window was open for “so long”, Solskjær was asked how it was acceptable for a club of United’s stature not to have completed greater business earlier. “Of course the transfer window is still open for a little while and the club has been working and they know my view and that’s that we’re here to strengthen it – [to ensure for] the long term as well,” he said.

Solskjær stated he was in accord with Gareth Southgate’s decision to leave Mason Greenwood out of his England squad for this month’s matches as further punishment for his misdemeanour in Iceland with the squad during the previous international break.

“I respect Gareth’s decision. I had a very nice chat with Gareth about our England players,” he said. “It’s important for players to get some minutes [by playing in internationals but] we’ll get loads of training in for Mason.”

Solskjær laughed off José Mourinho’s jibes regarding United being awarded lots of penalties, as the Tottenham manager prepares to return to Old Trafford on Sunday. “For me, José is a very charismatic coach and manager and I’ve enjoyed watching him and he’s a winner. But I’m not one of these that really goes into mind games.” – Guardian