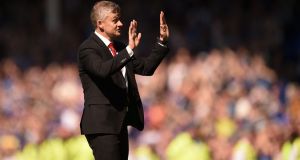 Ole Gunnar Solskjær questioned the desire of Manchester United’s players and admitted some will not feature in his plans for a successful reign at Old Trafford after suffering a 4-0 humbling at Everton.

The United manager said his pitiful team were beaten in the basics of football at Goodison Park, where Everton recorded their biggest win over the Manchester club for 35 years. Marco Silva’s side have now beaten United, Arsenal and Chelsea in successive home games, keeping a clean sheet in each, and outstanding goals from Richarlison, Gylfi Sigurdsson, Lucas Digne and Theo Walcott capped a dominant 90-minute display. It prompted an apology from the United manager to supporters on the pitch and in his post-match press conference.

“We have got to apologise to the fans because they were absolutely fantastic,” said Solskjær. “That performance is not good enough for a Manchester United team, from me to the players. We let the fans down. We let the club down. That performance is difficult to describe because it was so bad. They beat us on all the basics: long throw – put your head in, our corner, they counterattack and score, their corner, they score. We were beaten on all the ingredients you need, added to the talent. There is no place you can hide on the pitch. It was 85 minutes before we got a strike on target which is not good enough.”

Solskjær claimed United were not fit enough after a game when they collectively ran 8.03km fewer than their opponents. He also paused for six seconds and shook his head slightly when asked whether his players cared enough.

“I don’t know,” he said, eventually. “You have got to ask them. I have asked them. Of course if you want to play at this club it has to be more. I want my team to be the hardest-working team in the league. That is what we were under Alex. Giggs, Becks, Gary Neville, Denis [IRWIN]. No matter how much talent you have got, you run more than anyone. You can’t change your whole squad. One step at a time. I am going to be successful here and there are players who won’t be part of that.

“We were two points ahead of Everton when I came in. I wasn’t under any illusions that we could win the league or challenge for the top two. The amount of points we have taken is credit to the players. Maybe it has caught up with them. Players will know it has to mean everything to play for this club, like it does to the fans. It is not a surprise when you hear the stats that Everton have run more than us. It is not just about running, it is about decisions, putting your head in where it hurts. It hurts to win football matches. We were far off Everton. They deserve all the credit.”

The former Manchester United player Gary Neville described the display as ‘rancid” and added: ‘There are Japanese weeds rotting that football club, and it’s attacking the foundations of the house that need dealing with properly.’

The aforementioned Neville was scathing of United’s players in his commentary for Sky Sports. Neville said: “The fact he [SOLSKJAER]had to apologise to the fans is embarrassing. I’ve often said that if clubs have weeds in the garden, you’ve got to get rid of them. But there are Japanese weeds rotting that football club, and it’s attacking the foundations of the house that need dealing with properly. That performance was rancid. I don’t need to name names, you know who they are. They are in the newspapers every day, they are on social media today.”

Silva, by contrast, was thrilled by a performance that lifted his team into seventh in the Premier League and contention for Europa League qualification. He said: “We were the best team on the pitch from the first minute. Good goals, quality, solid without the ball and we kept pressing them high and never give them a chance to feel comfortable. We gave a quiet afternoon for our goalkeeper too. The feeling of our fans and players enjoying what we are doing is everything I want as a manager.”

Gordon D’Arcy on the battle Ireland face; McClean says abuse has decreased 07:30
Seán Moran: Election fever a reminder of the GAA's fertile political soil 07:00
Navratilova apologises for breaking protocol with protest 06:50
Nike Vaporflys won’t be banned but regulations will tighten 06:39
Gordon D’Arcy: If Farrell can tap into our self-worth, we’re all on a winner 06:15

1 Gordon D’Arcy: If Farrell can tap into our self-worth, we’re all on a winner
2 Winds of change as Ireland name a refreshed team, picked on form
3 Who is Caelan Doris? Meet Ireland’s newest rugby star
4 Nike Vaporflys won’t be banned but regulations will tighten
5 Navratilova apologises for breaking protocol with protest
Real news has value SUBSCRIBE