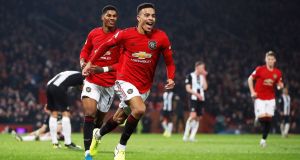 United beat Newcastle 4-1 at Old Trafford while the Clarets lost 1-0 to Everton before Saturday’s match at Turf Moor.

Solskjær believes it is unfair they have two matches in three days but did strike a positive note regarding his side’s powers of recovery.

“I don’t think it is fair to be expected to perform at the best of your level, both mentally and physically, 48 hours after you have played,” he said. “But I think we are in the best position to perform on Saturday. One – the game was over after 45 minutes. Two – we are young. We have a great chance against Burnley to perform at the best level because when you are 23, which is the average age of the outfield starting players today, that will make it easier for us to recover than Burnley I think.

“They played until the end against Everton. We were done after 45 minutes [against Newcastle] and used the second-half as recovery. But it is not fair, especially when a game at Watford [on Sunday] has just gone and there will be a game New Year’s Day [at Arsenal]. Two games in three days is possible once in a while but not when it is as tight as this.”

Solskjær referred to his own playing days as a striker for United. “It was easy for me. I was on the bench all the time – I never played 90 mins twice in three days. Maybe I did one year,” he said. “I scored against Villa and Ipswich. To do so you have to look after yourself. You have to eat the right things, drink the right things, sleep well.

Solskjær does not believe the cluttered festive calendar will be changed. “You are a traditionalist country. You like your traditions. I can’t see it being changed, no. But it should be,” he said.

United beat Newcastle via two Anthony Martial goals and strikes from Mason Greenwood and Marcus Rashford. They are now only four points from a Champions League berth and Solskjær is unsure if the race to finish fourth will go down to the final day of the season.

“If we get consistent it is not going to do down to the wire,” he said. “We should get into the top four without waiting for the last game against Leicester. But it might go down to the last game. Who knows? But for me, this team – I have said about next season that we might be challengers for a lot more next year, definitely, because we are young – but I still expect a lot from this team this year. I expect them to be ready for Burnley because they are next.”