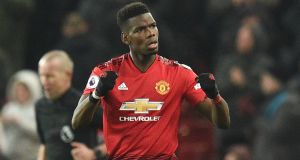 Ole Gunnar Solskjær has revealed he considers Paul Pogba as captaincy material at Manchester United, continuing his policy of proving the yin to José Mourinho’s yang.

Mourinho stripped the midfielder of the vice-captaincy and told him he would never captain the club, but Solskjær has worked with Pogba in the past and regards him as a leader.

“He’s a character, he influences people, he cares and he really wants to be successful,” United’s caretaker manager said. “I know the boy from before [Pogba’s first spell at the club when Solskjær was on the coaching staff] and when he’s enjoying himself he brings so many good things with him.

“He knows he can’t do it by himself, he knows it’s a team game, but you can see the personality, you can see what winning the World Cup meant to him, so for me, yes, he’s captain material.”

Pogba’s social media profile has proved an issue in the past but Solskjær is comfortable with modern trends, even if he does not always understand them. “It’s part of the era we live in,” he said. “That’s society now, it’s what kids do and what they are used to. I’m not, but they are. It’s all positive, it’s all good messages and I don’t have any problem with it because that’s Paul and that’s Jesse [Lingard] . As a club we have certain rules, obviously, but mostly it’s just common sense.”

Antonio Valencia remains club captain for the moment, though currently a non-playing one, with Ashley Young wearing the armband in his absence. “We’ve had some iconic captains here, all sorts of different types, from Eric Cantona to Roy Keane, ” Solskjær said. “The important thing is not to be afraid of standing in front of your team-mates and putting them in their place if you have to. To be fair to Ash, he’s quite good at that. He’s maybe one of the last of the old-school ones, he sounds like Rio Ferdinand or Gary Neville. ”

I am going to find the best first XI, because against Manchester United, we will need the best performance and quality

According to the Arsenal manager, anyone who falls below expected standards has to accept they are in the firing line. “This is normal,” Emery said. “I was not surprised because this team has big players and can think about winning the Premier League. They lost a lot of points.”

Arsenal on Friday night face a United side who have won seven games in succession since Solskjær replaced Mourinho. United have made up a lot of ground in the Premier League and the two clubs are locked on 44 points, with Arsenal narrowly ahead on goal difference in the chase for a top-four finish.

Emery is wary of how a revitalised United pose a big threat in the FA Cup tie at the Emirates. “They are very dangerous and in a good moment,” he said. “I am going to find the best first XI, because against Manchester United, we will need the best performance and quality.”

There will be at least one forced change, with Héctor Bellerín joining the long-term injury list after suffering a cruciate injury against Chelsea last weekend. Petr Cech will be hoping for a return to the team in goal. The Mesut Özil question rumbles on.

The potential for a rendezvous with Alexis Sánchez adds spice. The striker has been backed by Solskjær to respond in a positive way if given a feisty welcome on his first return to the Emirates since leaving Arsenal for United last January.

Despite a largely underwhelming year at Old Trafford, Emery admires Sánchez, having attempted to sign him while in charge of Paris Saint-Germain.

Even if the home crowd will not be too pleased to clap eyes on Sánchez, Emery is thinking only about how to quell the varied attacking threats United carry. “I respect him. In my preparations, every player is playing against the best player from Manchester United and one is Alexis Sánchez.” The player who was prolific at Arsenal has scored only once this season.

United have looked liberated under Solskjær, with Marcus Rashford in confident form leading the line.

Morikawa’s rise continues as he holds off Thomas in thrilling playoff 20:56
Marc Warren ends barren run with victory at Austrian Open 20:04
TV View: Proper Irish wake for Big Jack, the man who gave the nation notions 19:40
Toby Alderweireld nips in late to deliver derby delight for Tottenham 19:05
Jermaine Blackwood holds his corner to get West Indies over the line 18:33