Solskjær says Martial is now much hungrier for goals 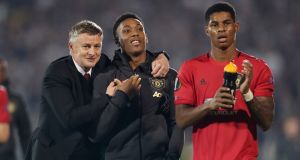 Ole Gunnar Solskjær says Anthony Martial has become an “infectious” presence at the training ground, and this is driving the forward’s goalscoring form for Manchester United.

Martial has four goals in seven appearances, either side of two months out with a hamstring injury. He can be perceived as not smiling often, and his previous manager, José Mourinho, was not always content with his attitude.

Solskjær said of the 23-year-old: “I don’t think he has had a long run of games as a No 9 since he played many years ago [here] as a boy. Now he is maturing. You have to be obsessed with scoring goals as a No 9, and he is looking more and more like a player who wants to score goals and not just show his tricks.

“For me he has matured a lot in his behaviour on the training ground as well. I believe we will see the best of him in the next few years. He looks happier and seems happy. He is an infectious boy – his smile and sense of humour. You can see he is happy here, and that rubs off on everyone and it’s great to see.”

United are at Bournemouth for Saturday’s early game, having won their past three away matches in a run of four in 10 days. Solskjær thinks confidence is building.

“The whole mood – it’s miles better on the training ground. They encourage each other. It’s nice to be a coach and a manager when you see them come out and wanting to do extras.

“The group is more ready for tougher times and better times. It’s a miles better group that we have now. The camaraderie, the attitude of the boys, the selflessness, the humility. We are getting closer to what we want to see every day – that culture, the performance in training, the way they prepare for games.

“We’ve travelled together and seen each other a lot [and] they’ve been disciplined.”

Solskjær is waiting on the fitness of Harry Maguire, Victor Lindelöf and Marcus Rashford.