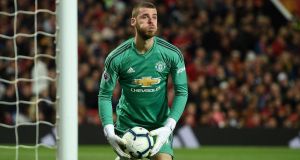 United keeper David de Gea after making a save during the league match between Manchester United and Manchester City at Old Trafford on April 24th. Photograph: Oli Scarff/AFP

Ole Gunnar Solskjær said he will not drop David de Gea for the visit of Chelsea on Sunday despite the Manchester United goalkeeper’s shaky form.

De Gea was at fault for Manchester City’s goals in the 2-0 derby defeat at Old Trafford on Wednesday. The Spaniard was also culpable for Lionel Messi’s second in the 3-0 defeat at Barcelona in United’s Champions League exit last week.

Asked if he might remove the No 1, Solskjær said: “No. Not at all. Because I trust David, and he’s for me been the best player United have had for the last six or seven years. He has been absolutely outstanding – going through tough patches is part of a footballer’s career and David will be fine.”

De Gea is yet to agree a new deal on terms that expire in summer 2020. Solskjær does not believe this is the reason for the goalkeeper’s form.

“That’s something you have to deal with as a footballer. It’s a situation [that can be normal]. David’s coming in every single day and doing what he should be doing.”

The manager also believes Paul Pogba will be at United next season, although the manager admits there can be no guarantees. The midfielder’s future is unclear, and it is understood Pogba will consider departing if United do not qualify for the Champions League.

Solskjær said: “You can’t guarantee anything in football, but yes, I think Paul’s going to be here. He’s very determined to succeed at Man United.”

The Norwegian understands how Pogba can be a lightning rod for the side – singled out for praise when winning, criticised for being off-form when losing. United have lost seven of their past nine matches.

“That’s just the standards he sets because, when he’s creating chances, scoring goals, doing loads of work [that’s fine],” said Solskjær. “Everyone looks to Paul, [saying] could you have done better? But he’s done fantastic for us. We want him to do well. He’s a leader in that dressing room and on the pitch for us.”

Meanwhile, Maurizio Sarri will consider his first season at Chelsea a success whatever the outcome of the club’s pursuit of Champions League qualification, but has challenged his players to secure a top four finish and a place in the Europa League final in the weeks to come.

The Londoners can open a six-point gap from United, effectively knocking their hosts out of contention for the top four, by winning at Old Trafford on Sunday, with qualification for Europe’s elite competition in their own hands.

Sarri has also taken the team to a Europa League semi-final against Eintracht Frankfurt, and saw his team beaten on penalties by Manchester City in the League Cup final.

Yet the season has actually been played out to grumbling discontent from the sidelines at the style of football mustered by Sarri’s side. Asked if it would constitute a failure if Chelsea did not secure a return to the Champions League, Sarri said: “No. No, we played a final, which we lost on penalties. We are in the semi-final in the Europa League. We are fighting for the top four. So the season, at the moment, is good.”

The Chelsea head coach has accepted a decision, made by the club, Burnley and the English Football Association, not to pursue his allegation that members of the visiting coaching staff had repeatedly referred to him as “a shit Italian” during Monday’s draw at Stamford Bridge.

Sarri was sent to the stands after leaving his technical area, an offence which saw him fined £8,000, yet the comments allegedly made by Burnley’s staff, which Chelsea reported to the match official, would have constituted a breach of FA Rule E3 (2) in referencing nationality and, if proven, opened the door to a suspension and heftier fine.

Instead the FA indicated on Thursday that no further action would be taken around the fixture. Chelsea later issued a short statement confirming issues “between both benches have been resolved between the coaches and clubs”.