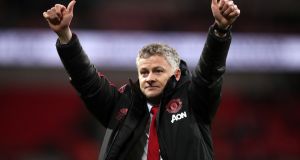 Ole Gunnar Solskjær believes his management of Manchester United will face a different test when a game is finally lost but is confident he and the players will respond.

United have won all six of the Norwegian’s matches in advance of Brighton’s visit today. This represents the best start from any United manager, yet Solskjær accepts that how he and the team respond to defeat will be telling.

“Yes, we will lose a game,” he said. “Yes, we will have to react to it and get up the next morning. I’ve seen enough to know they have the character to turn it round, and I know I do have that character.”

United have not gone behind since Solskjær replaced José Mourinho. “It’s a different kind of test for me and the players. How do we react? How do the players react when we go 1-0 down? How do I react when we go 1-0 down? I’ve been 1-0 down a few times in my career as a manager but I haven’t had the quality of players like I have now. I have to say that I’m looking forward to seeing them go one goal down and turning it around because they’ve done it so many times this year.”

Solskjær’s settled front three has consisted of Jesse Lingard, Anthony Martial and Marcus Rashford, with Romelu Lukaku kept out as the No 9. But the caretaker insisted last season’s top scorer was still in his plans. “He’s a big part of the squad, definitely, with his personality around the place,” he said. “There’s no one scoring as many goals as him in training.

“There are the three who play the most but then you’ve got Rom, you’ve got Juan [Mata] , you’ve got Alexis [Sánchez] – I’ve got a front six I can rotate with and Rom is definitely going to be playing games.”

He is confident all will be kept content. “I used to be one of four strikers when we played with two,” the former United player said. “Now we have six forwards and we play with three most of the time. We’ll be okay to be able to rotate and there’s enough games and playing time.