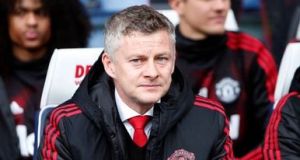 Ole Gunnar Solskjær during the game against Huddersfield Town. “We played some good stuff for half an hour, but when we created opportunities we didn’t take them.” Photograph: Getty Images

Ole Gunnar Solskjær put a brave face on Manchester United’s latest disappointment, but accepted his side had not been good enough to put away chances against a dispirited and disorganised Huddersfield that would have kept hopes of a Champions League finish alive.

“We played some good stuff for half an hour but when we created opportunities we didn’t take them,” Solskjær said. “We didn’t capitalise when we were on top and then we became sloppy.

“We didn’t perform to the required level, and though we are all disappointed not to be in the Champions League next season the Europa League is probably the right place for us at the moment.

“We have been inconsistent over the season but also within games, and where we are now is possibly a true reflection of what we deserve. The league table does not lie. We’ve had plenty of opportunities to grab third or fourth place but we were not able to do it.”

Alexis Sánchez picked up another injury and left the field in the second half, and though Solskjær refused to discuss the possibility that this might be his last appearance in a United shirt he did indicate that some players might be moved out in the summer.

“This is not a time to single out individuals. The players haven’t let me down, we’re a team, but a tired one in the end. You can keep going when you are winning but it’s hard when results are going against you.

“The effort and attitude of the players was not the problem today, we just weren’t good enough to hold on to a winning position. The goal we conceded was a bit of a gift to Huddersfield. I’ve seen us do that too often from corner kicks of our own, and it’s something we will be working to rectify over summer.”

Though Huddersfield could have been well beaten – Paul Pogba hit the bar twice – few begrudged the Terriers a creditable draw at the end of a gruelling season. “We need to keep believing,” Jan Siewert said as he prepared for life in the Championship. “Today we showed what is possible against a really tough opponent – we matched a good team.”

While the Premier League title race has been contested by two thoroughbreds the battle to finish third and fourth has descended into a demolition derby in which Chelsea emerged from the wreckage to seal a top-four finish on Sunday.

Maurizio Sarri’s team beat Watford 3-0 at Stamford Bridge in their penultimate game to ensure they will return to the Champions League next season, but Manchester United will definitely not be joining them. The 1-1 draw away to bottom club Huddersfield Town ensured Solskjaer’s side can finish no higher than fifth.

Arsenal then handed their London rivals Chelsea and Tottenham Hotspur a welcome gift by only drawing 1-1 at home to a Brighton side whose top-flight survival had been sealed 24 hours earlier. That meant Chelsea were guaranteed a top-four finish, while Tottenham Hotspur, whose domestic form has collapsed culminating in a nine-man defeat at Bournemouth on Saturday, are all but assured of a Champions League spot due to their superior goal difference. While Arsenal could still match their north London rivals’ total of 70 points should they win at Burnley on the final day of the season and Spurs lose at home to Everton, they must also achieve a highly unlikely eight-goal swing.

“We knew it is going to be difficult, but our focus is now the Europa League,” Arsenal manager Unai Emery, whose side lead 3-1 going into the second leg of their semi-final at Valencia next week, said with an air of resignation. “We have the opportunity in the Europa League to do something important, and we will try and do that.”

Arsenal had taken an ninth-minute lead through Pierre-Emerick Aubameyang’s early penalty. but Glenn Murray’s spot kick dragged Brighton level, meaning Arsenal have earned a miserly one point from the past 12 on offer.

Chelsea have not been a great deal better in an increasingly inept scrap for the top-four, picking up only two from nine points in their previous three games, and they were booed off at halftime against Watford with the score 0-0.

Quickfire headers from Ruben Loftus-Cheek and David Luiz early in the second half, both from Eden Hazard assists, put them in control and Argentine marksman Gonzalo Higuain added a third in the 75th minute.

“In the first half we were in trouble because we were tired, physically and mentally,” Sarri said. “We were lucky of course because we scored after two minutes and after the first goal, probably we improved mentally.”

Sarri gave a brief substitute appearance to title-winning defender Gary Cahill for what is almost certainly his last Chelsea appearance in the league at Stamford Bridge.