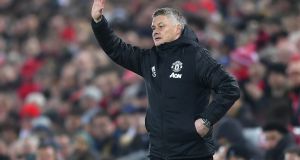 Ole Gunnar Solskjær has refused to engage with Gary Neville’s criticism of Ed Woodward, the manager instead pointing to the “strides forward” made by Manchester United in Sunday’s defeat at Liverpool.

Neville, a former club captain, described Woodward’s player recruitment as “unforgiveable” in a vociferous attack on the executive vice-chairman after the 2-0 loss at Anfield, in which Mo Salah scored the late second goal.

Solskjær was asked about Neville’s comments. “For me we lost to Liverpool, a team that you all say are fantastic, and we’ve been in the game until the last kick,” he said. “And, for me, that’s strides forward. We’re disappointed losing the game, we don’t want to be behind them but there were signs that we are on the right track.

It was put to Solskjær that fans are unhappy at being 30 points behind Liverpool. “You can look back at history and of course we know we’re not where we want to be and should be and historically have been,” he said. “It’s just down to us now to work better. I’ve been here 13 months and my experience with the players we’ve brought in have been good so no complaints whatsoever.”

Marcus Rashford will be out for a prolonged period with a double stress fracture of the back. Solskjær said it was a problem suffered in last Wednesday’s FA Cup win over Wolves when Rashford lasted only 15 minutes as a replacement, and not an aggravation of an existing injury.

“He’s not had that injury before, no,” he said. “He complained a little bit after Burnley [in late December], he felt it [his back] the first time and we managed him as well as we could then: he had some days off for treatment, was taken off in games and suddenly this was a new injury. He didn’t have any injuries before then.

“Marcus is good, he’s a positive guy and he knows this is not what he wanted but he’s always positive, he wants to get back as quickly and safely as possible and we’ll give him that time. When he feels ready and medically cleared he’ll be back.”

Rashford is United’s top scorer with 19 goals and Solskjær is hoping to sign a striker in January. “We’re always looking at improving the squad and seeing if there’s anything out there but nothing I can talk about now,” he said. “You’re never 100 per cent sure something’s going to happen.”

Solskjær is nonplussed by the English Football Association having charged United with failing to control their players during the loss at Liverpool. A group complained to the referee, Craig Pawson, after Virgil van Dijk challenged David de Gea and Roberto Firmino subsequently scored.

VAR ruled out the goal and Solskjær said: “Maybe I shouldn’t talk too much about that. Let’s get that decision done, but [the goal is] overturned. I reacted myself because everybody could see it was a foul.” - Guardian

1 Keeping Donegal on the road to success a costly business
2 Six Nations: Ireland v England all you need to know guide
3 England v Ireland preview: Ireland’s revival to face its sternest test
4 Matt Williams: Ireland will need to step up on Wales display to prevail at Twickers
5 Ireland Slam England at the Gardens to open up Grand ambitions
Real news has value SUBSCRIBE