Paul Pogba and Marcus Rasford on target in victory over Brighton 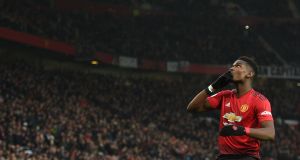 Ole Gunnar Solskjær’s record-breaking start to life in the Manchester United dugout continued as Paul Pogba and Marcus Rashford struck against Brighton to secure a seventh straight win in all competitions.

On a day when Old Trafford stood to remember Sir Matt Busby ahead of the 25th anniversary of his death on Sunday, the caretaker manager broke another of the Scot’s long-standing United records.

In the process of claiming a seventh successive victory in the hot seat, Solskjær became the first Red Devils boss to win their first six league games, with Pogba’s penalty and a Rashford stunner helping see off Chris Hughton’s Brighton 2-1.

This victorious streak sees United’s 1999 treble hero go level with Carlo Ancelotti and Pep Guardiola in the Premier League record books, and further justifies the club’s decision to parachute him in to replace Jose Mourinho a month ago.

Pogba was reduced to a watching brief under the divisive Portuguese but continues to go from strength to strength under Solskjær.

The France midfielder scored the penalty he won in a first half that saw in-form Rashford mark his 150th appearance for the club with a stunning strike from an acute angle.

Pascal Gross scored the only goal of the second period as Brighton pushed but ultimately failed to end Solskjær’s winning run.

The hosts started strongly and not even Diogo Dalot’s late inclusion in place of the ill Luke Shaw could throw them off kilter.

Solskjær’s Reds smelt blood and their fleet-footed attackers attempted to disturb Brighton’s well-organised backline, although Shane Duffy’s header showed they would have to be alert at the other end.

Albion certainly looked like they had the ability to frustrate the hosts and Glenn Murray volleyed wide late in the first half.

But United’s sharpness came through and saw them boast a two-goal cushion at the break.

Rashford had seen an effort cleared off the line and another bend just wide by the time United broke the deadlock in the 27th minute.

Pogba, who earlier saw an overhead kick blocked, controlled well on the right and burst away from Gaetan Bong, whose attempts to halt the World Cup winner resulted in referee Paul Tierney pointing to the spot.

Groans echoed around Old Trafford as the Frenchman began his now customary stuttered run up, but an unerring finish soon had the United faithful cheering. Pogba brought out the ‘rocking the baby’ celebration.

David Button produced a superb close-range stop to deny Anthony Martial after being found by an equally impressive Victor Lindelof ball from the back, but the Brighton goalkeeper could do little about United’s second.

Three minutes before the break, Rashford collected a return ball from full-back Dalot. The England striker had everything to do, but expertly turned away Gross and curled a stunning strike into the top right-hand corner under pressure.

It was a superb goal followed by stoppage-time handball appeals against Phil Jones falling on deaf ears.

United pressed on after the break and Rashford tried his luck from a free-kick before hitting a fine cross that Jesse Lingard could not quite get a telling connection on.

Martial showed quick feet and struck just off target as the pressure mounted, with balls having to be repelled in the box by hard-working Brighton.

Dunk fired into the side-netting as Hughton’s men showed the odd threat, which brought a 72nd-minute goal as Gross controlled a smart cross by Davy Propper and struck past David De Gea.

Brighton kicked on after that and, while the Spain goalkeeper had nowhere as much to do as at Tottenham last weekend, De Gea had to stay strong to punch behind as Duffy threatened from a free-kick.

Pogba struck wide and Rashford got a yellow for a late lunge as United dug deep to hold on for another precious win after a nervy conclusion.